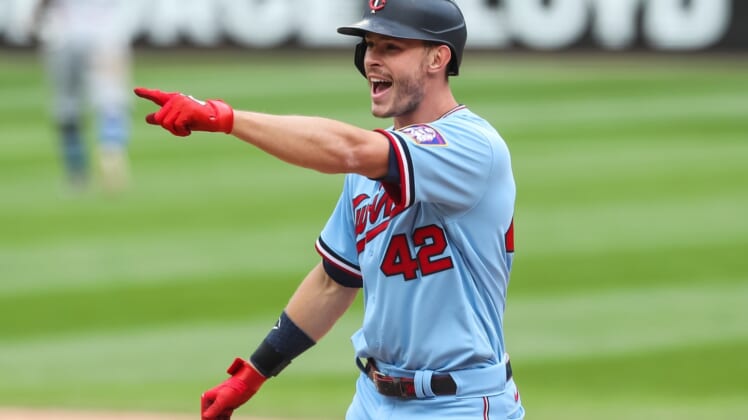 Max Kepler blooped a single to center to drive in Luis Arraez from second base in the bottom of the ninth inning as the Minnesota Twins snapped Boston’s nine-game winning streak with a 4-3 walk-off victory on Thursday afternoon in Minneapolis.

Kepler, who was 0-for-11 in the series before his game-winning RBI, drove in Minnesota’s first ninth-inning run of the season as the Twins snapped a five-game losing streak.

Arraez went 4-for-5 with two RBIs, the third four-hit game of his career, and led off the ninth with a single to center off reliever Adam Ottavino (1-1). He then advanced to second with Jorge Polanco was hit by a pitch. After Nelson Cruz struck out, Kepler blooped the game-winner into shallow center.

Alex Colome (1-1) picked up the win in relief for Minnesota, which got seven shutout innings from starter Michael Pineda. Pineda faced just two batters over the minimum and retired 14 in a row after allowing a leadoff single to Kike Hernandez to begin the game. He allowed two hits, walked one and struck out six.

Alex Verdugo had a game-tying, bases-loaded double for Boston, which finished with just four hits. It was the first loss since an 11-3 setback to the Baltimore Orioles on April 4 at Fenway Park for Boston. The nine-game win streak was the longest for the team since a 10-game streak on July 2-12, 2018.

Minnesota took a 2-0 lead in the second inning on a two-out bases-loaded single by Arraez. Sano made it 3-0 in the sixth when he led off with his second home run of the season, a 404-foot drive deep into the second deck in left.

Pineda was pulled despite throwing just 88 pitches and Minnesota’s bullpen couldn’t hold the lead as the Red Sox rallied to tie it in the eighth despite getting just one hit. Hansel Robles began the inning by hitting Christian Arroyo and walking Hunter Renfroe, then loaded the bases two outs later when he walked pinch-hitter Marwin Gonzalez.

Left-hander Taylor Rogers then came in to face lefty Alex Verdugo, who cleared the bases when he lined a 3-2 fastball down the left field line.