Twins avert sweep vs. Yanks thanks to Carlos Correa’ homer 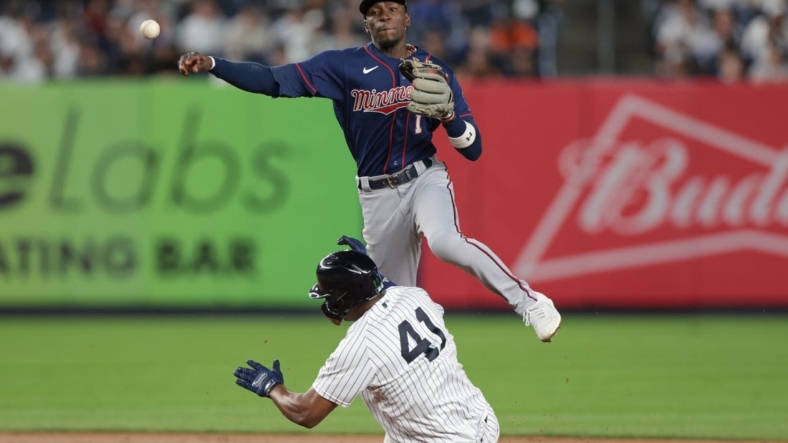 Carlos Correa silenced the hecklers by hitting a tiebreaking, two-run homer in the eighth inning as the visiting Minnesota Twins hung on for a 4-3 victory over the New York Yankees on Thursday night to avoid a four-game sweep.

Correa heard chants of “You’re a cheater” throughout the series in reference to his connection to the 2017 Houston Astros sign-stealing scandal.

Minnesota reliever Michael Fulmer escaped a bases-loaded jam in the ninth inning to record his third save.

With the score 2-2 and one out in the eighth inning, Yankees reliever Wandy Peralta (2-4) made a fielding error for not stepping on first base. The decision was upheld on a replay review that infuriated New York manager Aaron Boone.

Peralta fanned Kyle Garlick before he was replaced by rookie Greg Weissert. Correa then hit his 18th homer and second in as many games for a 4-2 lead. After fouling off the previous two pitches, Correa drove a 1-2 slider into the left field seats.

In the bottom of the eighth, Aaron Judge doubled and later scored on a wild pitch by Jorge Lopez. Twins reliever Caleb Thielbar subsequently struck out pinch hitter Giancarlo Stanton with a curveball to end a nine-pitch at-bat with runners on first and third.

In the ninth, Fulmer allowed one-out single by Oswaldo Peraza and a double to Aaron Hicks before intentionally walking Judge. Fulmer then struck out Gleyber Torres and sealed the win by retiring Isiah Kiner-Falefa on a groundout.

Former Yankee Gary Sanchez produced an RBI double and Nick Gordon hit a run-scoring single as Minnesota (69-67) won in New York for the first time since May 2019, snapping a 10-game losing streak that included two AL Division Series games. Including the postseason, the Twins are 3-24 in their past 27 visits to New York.

Miguel Andujar hit a two-run homer in the second off former Yankee Sonny Gray as the Yankees (83-55) had a four-game winning streak stopped.

New York’s Nestor Cortes was on a pitch count in his return from a brief injured-list stint caused by a groin injury. Cortes allowed two runs on two hits in four-plus innings.