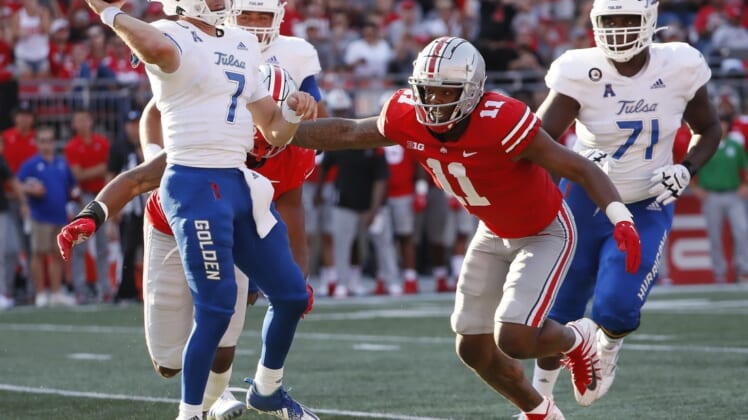 During a team meeting that extended longer than usual, Tulsa coach Philip Montgomery acknowledged the difficult conversations that followed the Golden Hurricane’s 45-10 loss to the Houston Cougars on Oct. 1.

The Golden Hurricane (1-4, 0-1 American Athletic Conference) produced competitive efforts in nonconference losses to Power 5 programs Oklahoma State and Ohio State, performances that made the showing against the Cougars equally surprising and disappointing.

Montgomery demanded that his players refocus on the next opponent regardless of the most recent result, a philosophy that will be tested as Tulsa prepares to host Memphis on Saturday.

“Every week we’ve got a 24-hour rule, whether you win or lose; you’ve got to put it to bed and go to the next one,” Montgomery said. “So that’s what our mindset is right now, understanding that obviously we didn’t play the type of ball that we wanted to play. But that’s not indicative of who we are and how we’ve played all year. We’ve got to continue to get better and move forward.

“When you take a loss like that, it sits on you and weighs on you. It kind of hangs with you, and it’s harder to put those to bed than most are.”

Tulsa remains a threat behind an offense featuring redshirt junior quarterback Davis Brin, who is averaging 293.4 passing yards per game, and receivers Josh Johnson and Sam Crawford Jr., who both have enjoyed consecutive 100-yard receiving games this season. That level of production is enough to worry the Tigers, whose fast start to the season has cooled off a bit.

Memphis (3-2, 0-1) was unbeaten through three games, a run that included a rousing 31-29 victory over Mississippi State. However, turnovers have been a bugaboo of late, with Memphis guilty of six lost fumbles this season, factors in consecutive three-point setbacks to UTSA and Temple.

Execution is always paramount, especially during the grind of the conference schedule.

“The last three games have all been decided by three points or less,” Memphis coach Ryan Silverfield said. “When you get that close to that fine line in college football, the margin for error continues to shrink every year. We’ve got to continue to clean up the things that we need to, and our guys understand what’s at stake.”