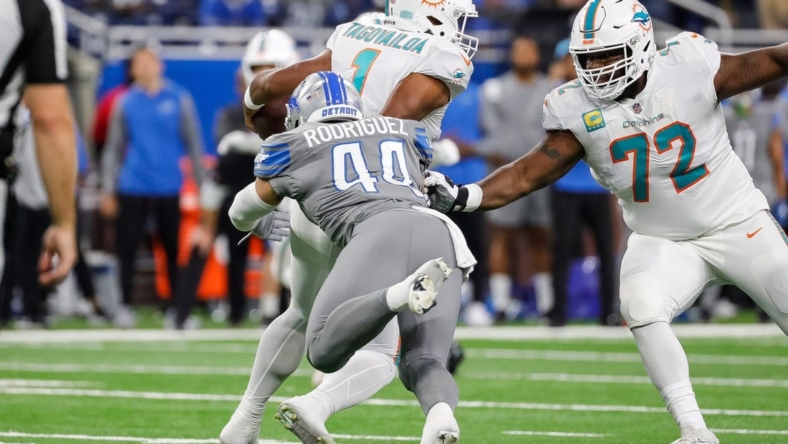 Tua Tagovailoa threw for 382 yards and three touchdowns and the visiting Miami Dolphins defeated the Detroit Lions 31-27 on Sunday.

Tagovailoa completed 29 of 36 passes, including a pair of scoring strikes to Jaylen Waddle. Tyreke Hill caught 12 passes for 188 yards, while Waddle hauled in eight passes for 106 yards. Raheem Mostert rushed for 64 yards on 14 carries for Miami (5-3), which erased a 14-point deficit.

Jared Goff completed 27 of 37 passes for 321 yards and a touchdown for the Lions (1-6), who have lost five straight. Jamaal Williams gained 53 yards on 10 carries and scored twice, but Detroit was shut out in the second half. Aman-Ra St. Brown caught seven passes for 69 yards.

Detroit, which had scored six points in its last two games, emerged from a wild first half with a 27-17 lead.

Williams scored from seven yards out on the opening drive. Following a Miami turnover, the Lions cashed in on Goff’s 7-yard pass to D’Andre Swift. T.J. Hockenson had a 58-yard catch on that drive.

Miami answered with an 80-yard drive, capped by Tagovailoa’s 5-yard pass to Waddle.

The Dolphins needed only four plays to match that, as Tagovailoa and Waddle hooked up on a 29-yard score. Hill had a 42-yard reception to set up the touchdown.

Badgley completed the first half scoring with a 26-yard field goal.

Alec Ingold’s 1-yard plunge with 9:11 left in the third pulled Miami within three points. The Dolphins grabbed the lead with 12 seconds remaining in the quarter on Tagovailoa’s 11-yard pass to tight end Mike Gesicki.

Detroit turned the ball over on downs with 2:52 left as Goff threw a long incompletion on fourth down from Miami’s 35-yard line.