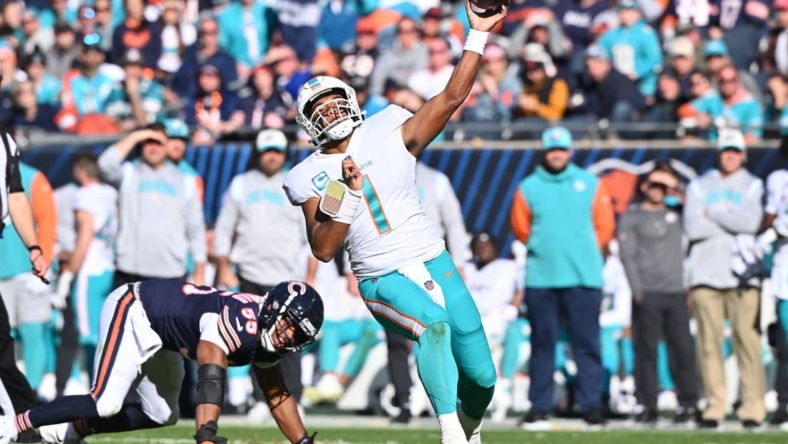 Tua Tagovailoa passed for 302 yards and three touchdowns and Tyreek Hill had 143 receiving yards and a score as the visiting Miami Dolphins defeated the Chicago Bears 35-32 on Sunday afternoon.

Miami (6-3) notched its third straight victory since Tagovailoa returned from a concussion. Despite a standout effort from quarterback Justin Fields — who passed for three touchdowns, ran for another and accounted for 301 yards of total offense — the Bears lost for the fifth time in six games.

Fields rushed for 178 yards, breaking Michael Vick’s record for most rushing yards by a quarterback in a regular-season game.

Chicago (3-6) finished with 252 yards on the ground. David Montgomery followed Fields with 36 rushing yards as the Bears joined the 1976 Pittsburgh Steelers as the only franchises in the Super Bowl era to run for 225-plus yards in four straight games.

Fields scored on a 61-yard rushing touchdown in the third quarter, then completed a two-point conversion pass to cut Chicago’s deficit to 28-25.

Cole Kmet had five catches for 41 yards and two touchdowns, with the second of those drawing the Bears to within 35-32 with 11:38 remaining. Miami followed with its second turnover on downs inside Chicago territory, but it regrouped to force a Bears punt. Chicago had another chance in the closing minutes but turned the ball over on downs near midfield.

Chicago and Miami each scored on their first two drives, which the Dolphins’ pair of touchdowns eclipsing a touchdown and field goal for the Bears.

As the Bears prepared to punt on their third drive, Jaelan Phillips burst through the line to block Trenton Gill’s kick, and Andrew Van Ginkel recovered, racing 25 yards for a touchdown and a 21-10 Dolphins lead.

The Bears rebounded, however, responding with a 12-play, 75-yard yard scoring drive punctuated by a 16-yard touchdown pass from Fields to Darnell Mooney. The game entered halftime with Miami ahead 21-17 after Jason Sanders missed a 29-yard field goal in the closing seconds of the second quarter.

Waddle caught an 18-yard touchdown pass on the opening drive of the third quarter and Wilson scored on a 10-yard reception after Fields’ 61-yarder.

Fields became the first player in league history with three passing touchdowns and at least 140 rushing yards in the same game.