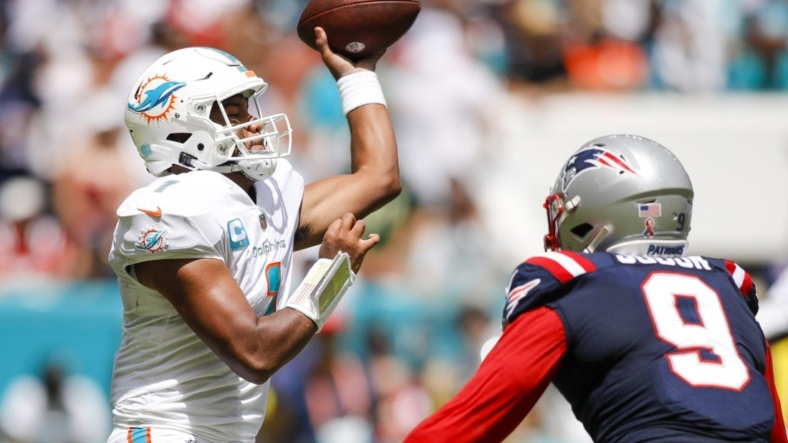 Tua Tagovailoa threw for 270 yards and the Miami defense had a strong showing as the Dolphins defeated the New England Patriots 20-7 on Sunday afternoon in Miami Gardens, Fla., in the season opener for both teams.

Mike McDaniel picked up his first win in his head-coaching debut, and the Dolphins won for the eighth time in their last 10 home games against New England.

Tagovailoa completed 23 of 33 passes with one touchdown, and Tyreek Hill finished with eight receptions for 94 yards in his Dolphins debut.

Patriots quarterback Mac Jones threw for 213 yards on 21-for-30 passing with one touchdown and one interception.

With 18 seconds left to play in the first half, Tagovailoa connected with Jaylen Waddle for a 42-yard touchdown to send the Dolphins into the break up 17-0.

Hill had six catches for 77 yards in the first half, while Waddle had two for 50 yards.

The Patriots picked up just 108 yards of total offense through the first 30 minutes of action. But New England finally broke through in the third.

After a 15-play, 92-yard march, Jones found Ty Montgomery for a 6-yard score. It was Montgomery’s first career touchdown with the Patriots.

New England moved downfield quickly on its opening drive, running seven plays to get to the Dolphins’ 22. Mac Jones took a shot to DeVante Parker in the end zone, but the ball was tipped up in the air and Jevon Holland came down with an interception.

Miami turned the turnover into points, as Jason Sanders capped off its ensuing drive with a 43-yard field goal for an early 3-0 lead.

Brandon Jones sacked Mac Jones at his own 6, causing him to fumble with 7:34 left in the second quarter. Melvin Ingram picked up the loose ball and easily scored to forge a 10-0 Miami advantage.

Sanders hit again in the third quarter from 49 yards, sneaking his kick inside the left upright.

In the Patriots’ last drive of the game, Mac Jones hit Kendrick Bourne for a 41-yard deep ball to get into Dolphins territory. Two plays later, Nelson Agholor lost a fumble, suffocating New England’s chance of coming back.