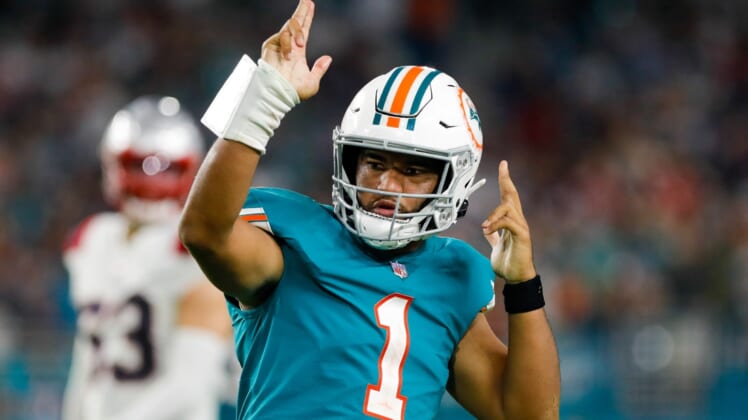 Miami Dolphins quarterback Tua Tagovailoa said Wednesday that he is embracing the opportunity created by the team’s very busy offseason.

The Dolphins, after all, acquired All-Pro wide receiver Tyreek Hill from the Kansas City Chiefs for a package of five draft picks, including a first- and second-rounder in this year’s draft. Hill promptly signed a four-year extension that will pay him $120 million, including $72.2 million guaranteed.

The high-profile moves have ratcheted expectations in South Beach, and Tagovailoa isn’t shying away from them despite heading into his third NFL season with a third offensive system.

“Well I think pressure is going to be there every time,” he said Wednesday. “I don’t feel more pressure that we’ve acquired all these guys, but it’s more of an opportunity that I get, that we all get as a team to show what we can do this year.”

The spotlight squarely remains on Tagovailoa, who is 13-8 as a starter in his first two seasons after Miami selected him with the fifth overall pick of the 2020 NFL Draft.

“I just feel like there’s so (many) things that have happened, a lot of changes,” Tagovailoa said. “And a lot of good changes, I guess, with the people that we’ve picked up, the guys we’ve acquired as well. Just the locker room feels different. And we’re all excited. This is the first time I’ve seen a lot of guys show up to Phase 1 of (the offseason program) — and a lot of veterans are showing up to it. I think that speaks a lot to (new coach Mike McDaniel) and the relationship he has to a lot of the guys on the team. And the amount of respect that he has from the players in the locker room.”