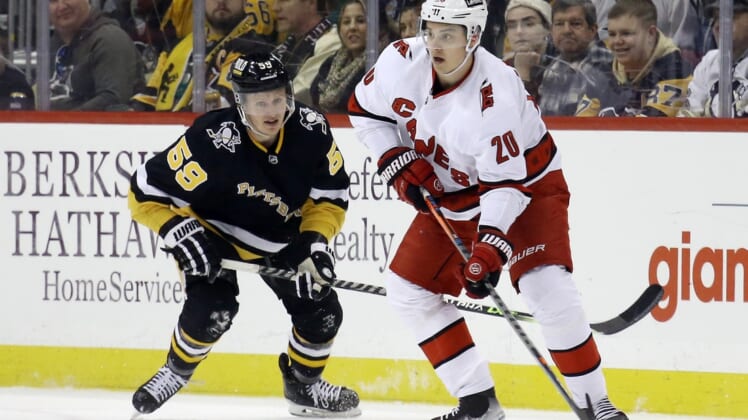 Brian Boyle had a goal and an assist, and Tristan Jarry made 41 saves Sunday as the Pittsburgh Penguins built a two-goal lead and held off the visiting Carolina Hurricanes 4-2.

Danton Heinen, Sidney Crosby and Zach Aston-Reese also scored for the Penguins, who won their second straight and are 5-1-1 in their past seven.

Brett Pesce and Sebastian Aho scored for the Hurricanes, who had their four-game winning streak snapped and missed a chance to sweep the teams’ three-game season series.

The Penguins moved to within six points of the first-place Hurricanes in the Metropolitan Division. Carolina has a game in hand.

Pittsburgh took a 1-0 lead with 1:10 left in the first. Boyle knocked Teuvo Teravainen off the pick with a big hit along the right-wing boards in the Carolina end. Teddy Blueger grabbed the puck and swooped around behind the net, then sent a backhander out to Boyle, who had headed for the net. From near the bottom of the right circle, Boyle lifted a one-timer short side past Raanta.

Heinen increased the Penguins’ lead with the only goal of the second, at 11:14. Mike Matheson blasted the puck from the right point. Heinen, in front but with his back to the net, got his stick blade on the puck and tipped it down and under Raanta’s pads.

Pesce pulled the Hurricanes to within 2-1 at 4:40 of the third. Near the top of slot, he took a feed from Vincent Trochek along the left wall. His rising shot got around Pittsburgh defenseman Mark Friedman, who was attempting to block it.

Crosby added an empty-netter with 1:39 left, giving him at least 20 goals for the 14th time in his career.

Aho’s wraparound goal with 1:25 left made it 3-2, but Aston-Reese sealed it with another empty-netter with 11.3 seconds remaining.