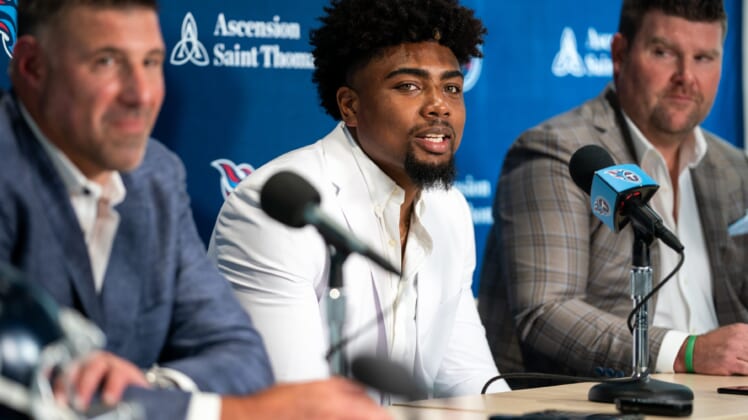 After Treylon Burks had a very bad day in his first practice for the Tennessee Titans, he looked much more like an NFL-ready player on day two of minicamp.

There is certainly a lot of pressure on Burks as he enters his first days as a professional football player. Obviously, there are the expectations of being a first-round pick in the 2022 NFL draft and a multi-million dollar contract. However, the Titans traded their top wide receiver AJ Brown on draft night to move up to the pick 18 to select the Arkansas star.

With Brown in Philadelphia, Treylon Burks will be expected to try and fill his shoes, or at the very least be a worthwhile contributor in the team’s 2022 pass game. However, on Friday he did not get off to a memorable start in his inaugural NFL practice.

Yesterday, Tennessee Titans reporter Paul Kuharsky detailed Burks’ difficulties at practice and how he didn’t make it through his first set of wide receiver drills. The 22-year-old was seen to have trouble breathing early in practice, eventually needed the assistance of an inhaler, and ended up leaving practice and heading to the trainer’s room.

“A lot was made about Treylon Burks leaving practice yesterday. Some of it was by people who weren’t even there. Burks came back today, and went through full practice w/no signs of fatigue. He had a drop but bounced back and made a couple of catches in team period & 7 on 7,” Davenport wrote on Twitter.”

The news certainly has to be a relief for fans because of the important role Burks will have during year one in Tennessee. Plus, it is still very early in the process, and there could have been a variety of reasons that affected the wide receiver’s workouts on Friday.