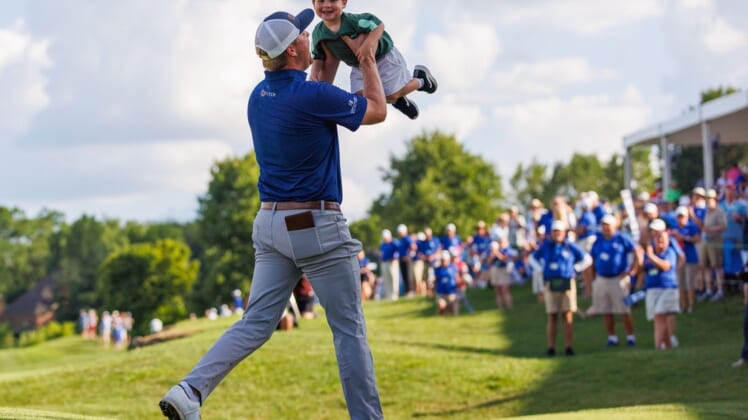 A series of weather delays couldn’t postpone a win for Trey Mullinax, as the 30-year-old birdied his final hole to win the Barbasol Championship in Nicholasville, Ky.

The victory was Mullinax’s first ever on the PGA Tour and locked up a spot at the Open Championship at St Andrews later this week.

“What an incredible honor to be able to go there (St Andrews) and play,” Mullinax said.

Mullinax, who recorded a 25-under 263 over the course of multiple postponements over four days, finished a stroke ahead of Kevin Streelman on the strength of a final-round, 6-under 66.

A 15-foot birdie putt on the 423-yard, par-4 18th hole at Keene Trace Golf Club was the difference. His second shot, a wedge that nestled up toward the right edge of the green, set him up to land the birdie.

Streelman — who had leapt into a tie for first after 17 holes with his birdie on the 399-yard, par-4 17th — settled for par on No. 18 and second place when he missed a birdie putt to force a playoff. Streelman finished with a 67.

“I gave my all,” Streelman said. “Man, Trey and I just battled each other. He’s one of my best friends out here so that was kind of fun as well. I’m frustrated I hit two incredible shots there into the last two holes and hit two good putts, one of them went, one of them didn’t.”

Coming into the day, Mullinax’s best finish had been a tie for second out of five top-10 finishes.