Up until the finals, four homers went 513 feet or farther, with Juan Soto of the Washington Nationals hitting the longest at 520 feet. Los Angeles Angels star Shohei Otani, the crowd favorite next to Colorado’s own Trevor Story, didn’t disappoint, but he didn’t reach the second round, falling to Soto 31-28.

Mancini, who missed all of 2020 after a colon cancer diagnosis, edged Oakland’s Matt Olson 24-23 in the first round, and he beat Story 13-12 in the semifinal. Alonso edged Soto 16-15 to reach the final again.

The semifinals seemed anticlimactic after the drama played out between Soto and Ohtani in the first round. Soto hit 22 and Ohtani rallied to match him after the three minutes plus the bonus time. Ohtani didn’t hit his first homer until his 10th swing.

Soto hit six in the one-minute tiebreaker, and Ohtani again tied him, although he missed on his last three, when any one of them would have given him the win.

Soto connected on all of his chances in the three-swing second tiebreaker, and Ohtani topped a grounder on his first swing, giving Soto the win 31-28. Ohtani hugged Soto to congratulate him.

Alonso was the big hitter in the first round. He had 25 before the bonus round, including one that went 514 feet, which would have been a record if not for Soto’s blast shot. 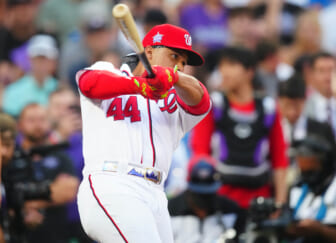 Alonso had 10 more homers in the one-minute bonus round to finish with 35, more than enough to beat the 27 by Kansas City catcher Salvador Perez.

Mancini was the first hitter of the night and had to sweat out Olson’s late charge to win by a single homer.

Story edged Texas slugger Joey Gallo in the first round 20-18. Gallo had 11 home runs before the bonus time and hit eight more after that, but his last swing was a short fly and the crowd cheered because he fell short of Story’s total of 20.