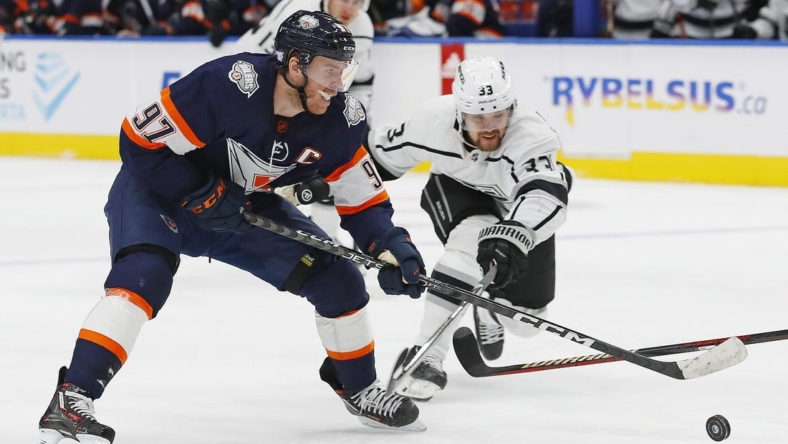 Trevor Moore scored all three goals for the visiting Los Angeles Kings in a 3-1 win against the Edmonton Oilers on Wednesday night.

It was the first hat trick of Moore’s five-year NHL career and just his third multigoal game.

Viktor Arvidsson had three assists and Cal Petersen made 22 saves for the Kings, who were coming off a 6-5 loss to the Calgary Flames on Monday in the opener of the four-game trip.

Zach Hyman scored and Stuart Skinner stopped 29 shots for the Oilers, who have lost five of their past seven games.

Edmonton forward Connor McDavid had just stepped out of the penalty box when Moore connected on a one-timer from the right circle.

Moore scored into an empty net with 53 seconds left to make it 3-1.

McDavid did not have a shot on goal until 4:59 remained in the game, and he committed two minor penalties for just the sixth time in his NHL career.

McDavid’s longtime linemate, Leon Draisaitl, had his 11-game point streak (seven goals, 13 assists) come to a halt. Draisaitl, who sits second in the NHL in points (28), did not have a shot on goal through the first two periods either.

Phillip Danault won the puck along the wall and made a one-hand centering pass to Moore for the one-timer from the high slot.

Arvidsson appeared to save a goal midway through the first period when McDavid swiped at the puck and it slid by Petersen and was headed for net, but Arvidsson swiped it aside with his stick.

The Kings blocked 29 shots in all while the Oilers blocked just eight.

Hyman tied the game off an assist from Ryan Murray at 12:47 of the second period.

Skinner made a save on a breakaway by Anze Kopitar at 14:00 of the middle period, but Moore scored 3:12 later to put the Kings ahead for good.