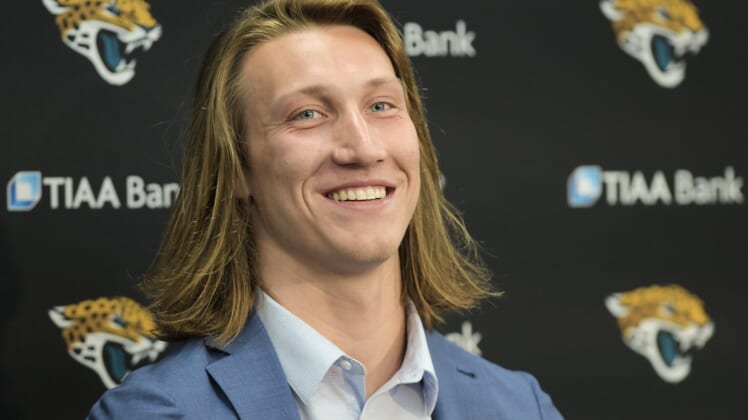 Jacksonville Jaguars quarterback Trevor Lawrence has been installed as the Offensive Rookie of the Year favorite after being selected with the top overall pick in the 2021 NFL Draft.

Lawrence is being offered at +300 by DraftKings and +270 by FanDuel ahead of Justin Fields (+400, +550), who was selected by the Chicago Bears. While Lawrence is expected to start from Day 1 in Jacksonville, the Bears have veterans Andy Dalton and Nick Foles on the roster if Fields needs some time to acclimate to the NFL.

It’s a similar situation for San Francisco 49ers pick Trey Lance, who is being offered at +700 by both sportsbooks. The North Dakota State quarterback is expected to be groomed for at least most of next season behind Jimmy Garoppolo.

Quarterbacks dominate the Offensive ROY odds, with the New York Jets’ Zach Wilson being offered at +850 by DraftKings and +1000 by FanDuel.

The top-non QBs at DraftKings are Cincinnati Bengals wide receiver Ja’Marr Chase and Atlanta Falcons tight end Kyle Pitts, who are both listed at +1100. Pitts is +1300 and Chase is +1500 at FanDuel, both behind New England Patriots quarterback Mac Jones at +950.

New Dallas Cowboys linebacker Micah Parsons is the early Defensive Rookie of the Year favorite at +400 at DraftKings and +550 at FanDuel. The odds at the sportsbooks diverge from there.

Pass rusher Jaelan Phillips (Miami Dolphins) is listed at +700 by DraftKings ahead of defensive end Kwity Paye (Indianapolis Colts) and cornerback Patrick Surtain II (Denver Broncos) at +1000. Paye is being offered at +750 at FanDuel along with Cleveland Browns linebacker Jeremiah Owusu-Koramoah, ahead of Phillips (+900) and Surtain (+1100).