Trevor Bauer sues woman who accused him of sexual assault 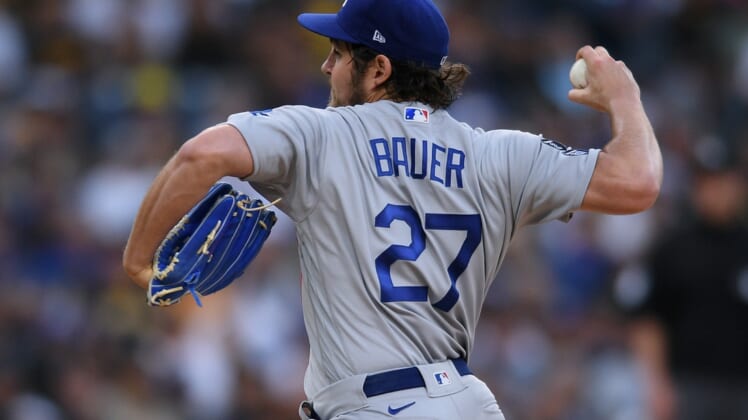 Los Angeles Dodgers pitcher Trevor Bauer is suing the woman who accused him of sexual assault, contending her motive was to destroy his “reputation and baseball career, garner attention for herself, and extract millions of dollars” from him.

The suit was filed Monday in U.S. District Court for the Central District of California and is seeking unspecified monetary and punitive damages. Bauer contends the woman “fabricated allegations of sexual assault” and “made false and malicious statements” as she sought a domestic violence restraining order last June 29.

That filing came a day after Bauer’s most recent pitching performance for the Dodgers, with whom he signed a three-year, $102 million contract before the 2021 season. He has been on Major League Baseball administrative leave since July 2, although the Los Angeles County district attorney declined to file charges.

Bauer has denied all wrongdoing.

The court filing describes, in graphic detail, the two sexual encounters between Bauer and the woman, who lives in San Diego, that occurred last spring. Per company policy, Field Level Media will not publish the name of alleged victims of sexual assault.

Bauer, 31, admits to having rough sex with her, which he said was at the woman’s request, and never performed a sexual act she didn’t want. The woman, in her request for the restraining order, accused him of acts that including choking her to the point of unconsciousness and punching her to the point of needing medical attention.

The restraining order was denied.

In the lawsuit, Bauer said the woman contacted him after their first sexual encounter in an attempt to set up a second meeting for “a rougher sexual experience so she could later claim this sexual experience was not what she requested and thereby lay the groundwork for a financial settlement.”

The suit also states the woman texted a friend and told her “they would be able to travel to Europe together in style once she was successful in her plot to destroy Mr. Bauer by tricking him into having rough and rougher sex with her.”

Also named in the suit is the woman’s attorney, Fred Thiagarajah, who is being accused of defamation because of comments he made to The Washington Post. Bauer previously sued Deadspin and The Athletic in relation to the case.

Bauer’s paid leave has been extended multiple times and is due to expire Friday. MLB has been conducting its own investigation and can choose to suspend Bauer under league policies even if no criminal charges are filed.