Trevor Bauer, Los Angeles Dodgers’ bats too much for Rockies 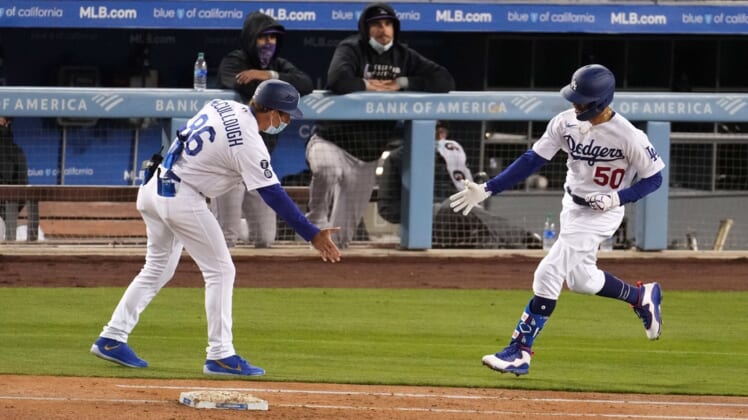 Max Muncy and Chris Taylor homered and had two hits apiece, and Mookie Betts also went deep for the Dodgers.

Bauer (2-0) had an impressive home debut for Los Angeles. He allowed just one hit — and infield single — struck out nine and walked two before leaving for a pinch hitter in the seventh inning. Bauer retired the last 14 batters he faced.

Garrett Hampson had the only two hits for Colorado, a single in the third and another leading off the ninth. The Rockies’ only other threat came in the second when Bauer walked the first two batters, but they couldn’t cash in on the opportunity.

The Dodgers quickly took a lead they never relinquished. After starter Antonio Senzatela (1-2) retired Betts to lead off the bottom of the first inning, Seager hit his first home run of the season to put Los Angeles ahead.

Two pitches later, Taylor gave the Dodgers back-to-back homers with his second of the season.

Los Angeles padded the lead during a long third inning. Betts led it off with a homer, his second of the season, and Seager followed with a double. Senzatela got the next two batters but then walked Will Smith and gave up an RBI single to Gavin Lux.

Los Angeles stretched the lead in the fourth. Seager reached on a one-out walk, Taylor singled and Muncy doubled to left-center field to drive in Seager to make it 6-0.

Muncy padded the lead in the sixth inning when he crushed a fastball from reliever Robert Stephenson over the wall in center for his second homer of the season and the Dodgers’ fourth of the night.