Trevor Ariza trade to the Miami Heat being finalized 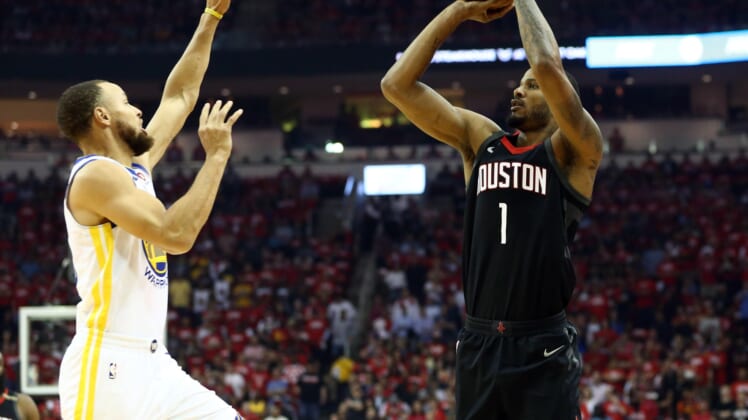 It was just a matter of time before the Oklahoma City Thunder pulled off a Trevor Ariza trade. The 35-year-old forward has not suited up for Oklahoma City this season after being part of three separate deals during the offseason.

Oklahoma City has been looking for trade partner for some time now. As was reported to potentially be the case earlier in the week, said trade partner has been revealed to be the Miami Heat.

According to ESPN’s Adrian Wojnarowski, Oklahoma City has dealt Ariza to the Heat in exchange for big man Meyers Leonard and a future second-round pick.

Meyers inclusion in the trade is interesting in that he was away from the Heat after using an anti-Semitic slur during a Twitch livestream earlier in March. Leonard, 29, is also out for the remainder of the season with a shoulder injury. He was simply included as a salary-filler. The big man will not suit up in Oklahoma City.

Impact of the Trevor Ariza trade for the Miami Heat

A three-and-D wing throughout his underrated 16-year career, Ariza continues to play at a high level. He averaged 8.0 points and 4.6 rebounds on 37% shooting from distance between the Sacramento Kings and Portland Trail Blazers a season ago.

The former New York Knicks second-round pick has played for nine teams throughout his career. During that span, he’s averaging 10.5 points and 4.8 rebounds while shooting 35% from three-point range and playing plus-level defense.

This is no small thing for Miami moving forward. Outside of Jimmy Butler, they have struggled with defense out on the perimeter during an otherwise disappointing season after earning a surprise appearance in the NBA Finals last fall. Ariza is an immediate upgrade from the likes of Duncan Robinson, Max Strus and Mo Harkless in that regard.

Why did the Oklahoma City Thunder pull off this deal?

It’s rather simple. Ariza was never going to play a game for the rebuilding franchise. Adding a second-round pick to the mix rather than buying him out altogether gives front office head Sam Presti more ammo to work with moving forward.

By virtue of the deals that shipped out Paul George and Russell Westbrook, among others recently, Oklahoma City has 34 draft picks over the next seven years. That includes 16 second-rounders. They now add even more to the stockpile, giving Presti a ton of avenues to return the Thunder back to relevance around the NBA moving forward.