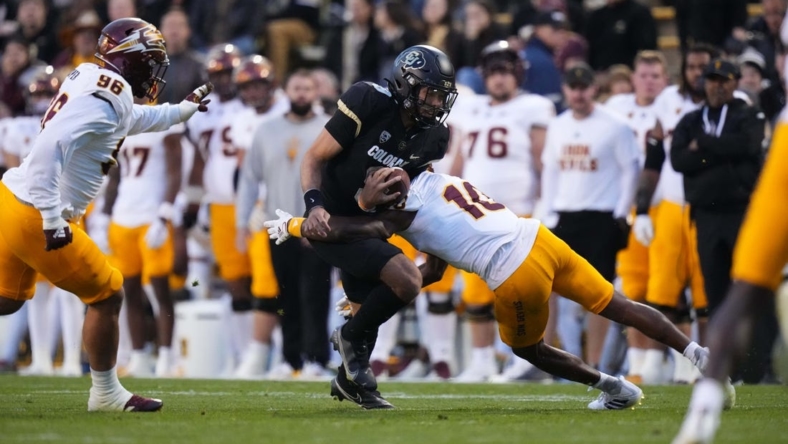 Trenton Bourguet threw for 435 yards and three touchdowns in his first career start, leading Arizona State to a 42-34 win Saturday at Colorado.

Bourguet, a former walk-on who has been a backup to Emory Jones, was declared the starter by Arizona State interim coach Shaun Aguano before the game.

Bourguet completed 32 of 43 pass attempts with three touchdown passes to Jaylin Conyers, who finished with six catches for 108 yards.

Bourguet then engineered two first downs, allowing Arizona State to run out the clock on its final possession.

Xazavian Valladay, who had a 26-yard run in that possession, finished with 118 yards on 23 rushes.

He went with Bourguet as the starter after a weeklong competition with Jones.

Aguano stepped into the interim head coaching role after Herm Edwards was fired.

Bourguet completed his first nine passes for 161 yards. He connected with six different receivers during that span.

He finished the first half throwing for 251 yards while completing 17 of 23 pass attempts.

Bourguet’s second touchdown pass to Conyers, a 5-yard throw with 8:11 left in the third quarter, gave Arizona State a 35-17 lead.

Colorado cut the lead to 35-20 on Cole Becker’s 27-yard field goal, his second of the game.

The Buffaloes drove for another potential score on their next possession.

Chris Edmonds stopped that possession, intercepting a pass from J.T. Strout at the Arizona State 10.

Smith finished with 111 yards on 24 carries and Tyson caught five passes for 115 yards.