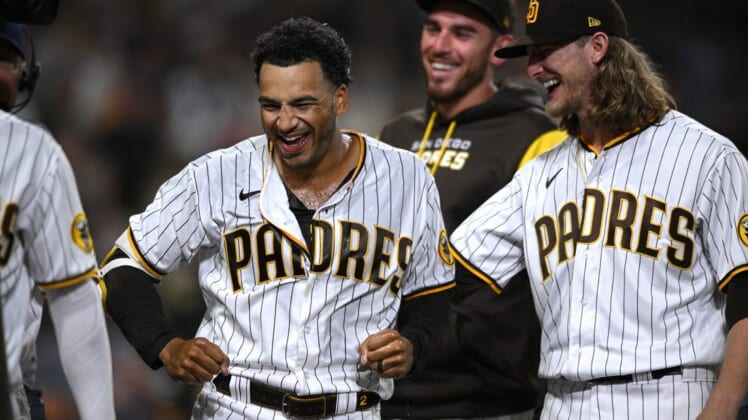 Trent Grisham hit a walk-off home run with one out in the ninth inning Tuesday night to give the San Diego Padres a 3-2 win over the visiting Colorado Rockies and a sweep of a day-night doubleheader.

Grisham, who hit a two-run homer and finished with three RBIs in the Padres’ 13-5 win in the opener, drove a hanging breaking pitch from Alex Colome into the right-field seats. It was the first homer allowed this season by Colome (2-4), who was making his 42nd appearance.

Grisham has homered in each of the three games, all Padres wins, to begin this five-game series. They have won four games in a row overall and five of their last six.

On a day when the Padres acquired Juan Soto and Josh Bell from the Washington Nationals and Brandon Drury from Cincinnati, the win went to left-hander and fellow newcomer Josh Hader (2-4) in his Padres debut. Hader was acquired from the Milwaukee Brewers on Monday.

Both teams scored twice in the first inning of the nightcap.

Colorado scored on an RBI double by Ryan McMahon and a balk by Padres spot starter Reiss Knehr. San Diego tied the game in the bottom of the inning on sacrifice flies by Jorge Alfaro and Wil Myers.

Rockies starter Jose Urena worked four innings, giving up the two runs on three hits and three walks. He struck out one. Austin Gomber pitched 2 2/3 innings, allowing a hit and two walks while striking out four, and Lucas Gilbreath struck out three in his 1 1/3 innings.