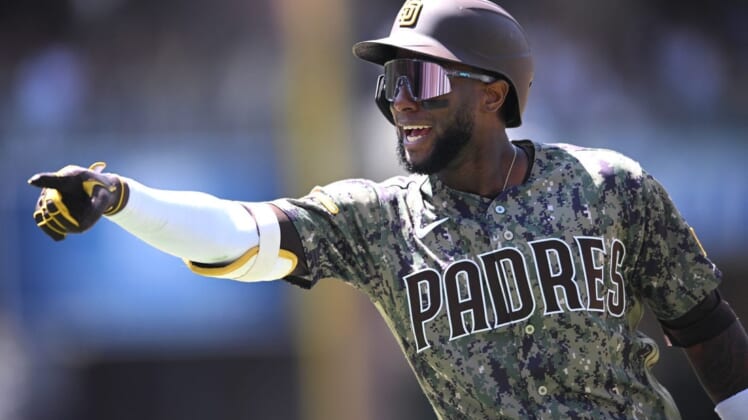 Trent Grisham hit a walk-off, two-run homer leading off the bottom of the 10th against Pittsburgh reliever Chris Stratton Sunday afternoon to give the San Diego Padres a 4-2 victory over the visiting Pirates in the rubber-match of a three-game series.

Catcher Jorge Alfaro was on second when the struggling Grisham (.164) hit his second homer of the season off the foul pole. The Padres are 12-5 in one-run games and 5-2 in extra-inning games.

In the top of the 10th, Alfaro made a diving tag of Pirates’ Hoy Park at the plate as the pinch-runner tried to score on a short wild pitch from Padres reliever Luis Garcia (4-2).

The Pirates tied the game with two runs off Padres reliever Nabil Crismatt in the top of the eighth after MacKenzie Gore had shut Pittsburgh out on two hits over seven innings.

Former Padre Tucupita Marcano singled to open the eighth and scored on a double by Ke’Bryan Hayes, who had hit a game-winning, three-run homer off Padres closer Taylor Rogers Saturday night. Hayes, whose double was off the tip of the glove of leaping left fielder Jurickson Profar, moved to third on Bryan Reynolds ground out to first and scored on Josh VanMeter’s single.

The Padres had taken a 2-0 lead in the fifth on a two-run homer by Profar. Jorge Alfaro led off the fifth with an infield single against Pirates right-hander Roansy Contreras and immediately moved to second on a wild pitch. Alfaro moved to third when Trent Grisham grounded out to first and remained there when Jose Azocar popped out on an attempted safety squeeze. Profar then lined a one-ball pitch from Contreras into the second row of seats in right for his sixth home run of the season.

The late rallies erased the efforts of two rookie starters.

Gore allowed two hits, three walks and a hit batter with nine strikeouts in seven scoreless innings to lower his ERA to 1.71. It was his longest outing, and he came within one of his career high in strikeouts. The Pirates never had more than one baserunner against Gore in any inning. Only three reached second.

Contreras (1-1) gave up the two runs on five hits and a walk with three strikeouts in his second Major League start. Contreras worked his way out of a bases-loaded jam in the second and retired seven straight hitters before the Alfaro single.