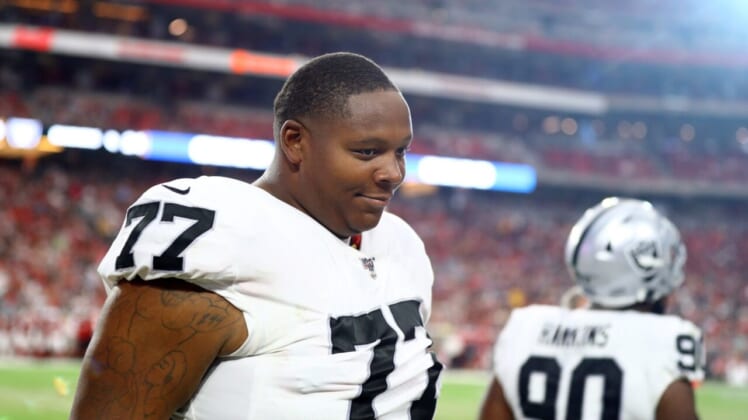 Offensive tackle Trent Brown ends his tumultuous time as a member of the Las Vegas Raiders as the team has reportedly agreed to ship the player back to his former team where he found fame and won a Super Bowl.

Who says you can’t go home again? Apparently not Trent Brown who will be traded back to his former team, the New England Patriots, as first reported by NFL Network’s Ian Rapoport.

Brown, who was oft injured and not available to the Raiders often during his tenure, has reportedly restructured his contract to rejoin Bill Belichick in Boston. Rapoport says the deal is just for one season allowing Brown the ability to be a free agent after next season. Brown had a remaining $19.25 million on his Raiders contract.

While the deal has reportedly been in the works for weeks, what the Raiders are receiving in return for Trent Brown isn’t known at press time.

Trent Brown returns to the Patriots where he turned a stellar 2018 into his big contract with Las Vegas (then Oakland). That Super Bowl season, Brown didn’t miss a game and parlayed it into his $66 million deal with the Raiders.

2020 was a nightmare season for Trent Brown and the Raiders. He played in just five games and sources inside the organization repeatedly grew frustrated with Brown’s inability to stay on the field and called into question his desire to work hard to return. Brown also ran afoul of the NFL’s COVID-19 policy and was twice on the pandemic injury list.

Trent Brown becomes the third Raiders starting offensive lineman from 2020 to be jettison by Las Vegas in the past 10 days. Last week, both veteran guards Gabe Jackson and Richie Incognito were released in salary cap moves. Incognito is a candidate to be resigned at a more team-friendly deal, according to reports.