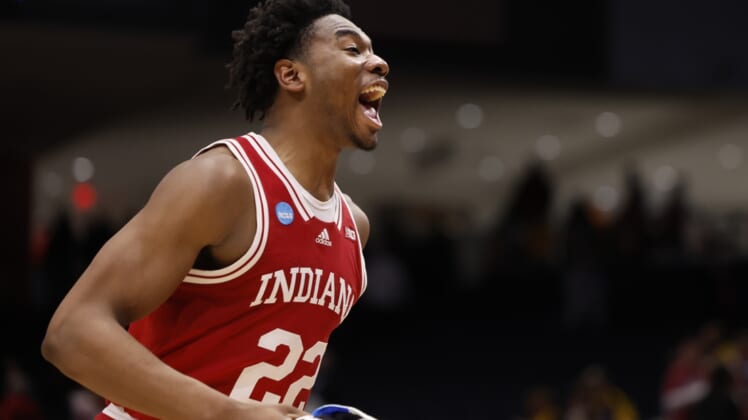 Jordan Geromino added 15 points and seven rebounds off the bench for the Hoosiers. Indiana (21-13) will move on to face 5-seed Saint Mary’s on Thursday in Portland, Ore.

Maldonado cut Indiana’s lead to 60-54 on a four-point play with 1:30 left, but Jackson-Davis answered with an inside basket to put the Hoosiers up 62-54 with 1:04 remaining, From there, Indiana was able to close it out at the foul line, making four of their final five attempts.

Jackson-Davis has scored 20 or more points in four straight games. Indiana, making its first NCAA Tournament appearance since 2016, won the game with defense, holding Wyoming to 43.5 percent shooting from the floor and scoring 17 points off 19 Wyoming turnovers.

Jackson-Davis scored 14 points in the first half, helping Indiana take a 30-25 lead into halftime. The Hoosiers flustered Wyoming into mistakes throughout the first half, scoring 11 points off 13 Wyoming turnovers.

Indiana went up 13-8 early on a Geronimo putback dunk, but Wyoming answered with a 7-0 run, taking a 15-13 lead on an inside Maldonado basket.

Maldonado put Wyoming up 23-22 with another inside basket as Ike picked up his second foul at 5:39 mark and was forced to sit the rest of the half. Indiana responded with an 8-0 run, with Jackson-Davis scoring six of the baskets on a transition layup off a Wyoming turnover and three free throws. Geronimo added another dunk off a Wyoming turnover to put Indiana up 30-23, but Wyoming cut the lead to 30-25 at halftime on a pair of Jeremiah Oden free throws with 1.9 seconds left in the half.