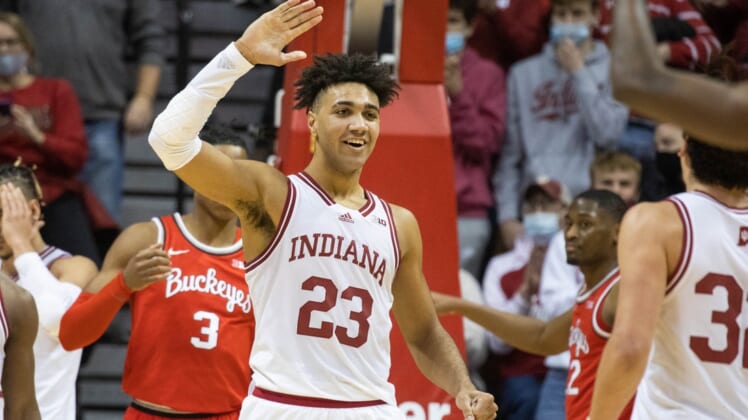 Trayce Jackson-Davis had 27 points, 12 rebounds and five blocks to lead Indiana to a 67-51 victory over No. 13 Ohio State Thursday night in Bloomington, Ind.

Race Thompson added 11 points and Trey Galloway scored eight off the bench for the Hoosiers (11-3, 2-2 Big Ten), who improved to 10-0 at home with their first win over a ranked team. Jackson-Davis posted his fifth double-double of the season.

After Branham hit a pair of free throws to cut Indiana’s lead to 46-45, the Hoosiers broke the game open with a 19-3 run, which included a combined 12 points inside from Jackson-Davis and Thompson. Jackson-Davis put Indiana up 52-45 with a three-point play, and a dunk from Thompson gave the Hoosiers a 61-48 lead. Galloway followed with a driving basket and a steal and a breakaway layup to put Indiana up 65-48 with 1:59 left.

Jackson-Davis scored 16 points in the first half, helping Indiana take a 33-30 halftime lead.

The Hoosiers were down by as many as eight points early, falling behind 15-7 on a hook shot by Ohio State center Joey Brunk. But down 16-9, Indiana went on a 9-0 run to take an 18-16 lead. Jordan Geronimo sank a 3-pointer to tie the score at 16, and Jackson-Davis followed with the first of his four first-half dunks to put the Hoosiers ahead.

Ohio State regained the lead 28-27 on a Justin Ahrens 3-pointer and went up 30-29 on a pair of Brunk free throws. But the Hoosiers closed the half on a 4-0 run, including an 18-footer from Xavier Johnson with 5 seconds left in the first half to put Indiana up 33-30 at halftime.

Indiana shot 41.4 percent from the field in the first half, while holding Ohio State to 34.5 percent shooting from the floor.