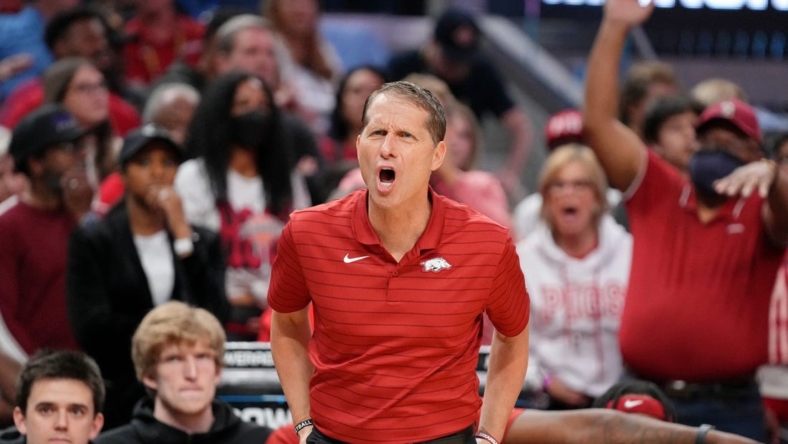 Transfers Ricky Council IV and Trevon Brazile joined with veteran Davonte Davis to lead No. 10 Arkansas to a 76-58 victory over North Dakota State in the season opener for both teams Monday night in Fayetteville, Ark.

Council, the American Athletic Conference’s Sixth Man of the Year for Wichita State last season, scored 22 points to lead all scorers while Brazile, who started 22 games as a freshman at Missouri, posted collegiate highs in points (21) and rebounds (12). Davis, one of only four returnees on the Arkansas roster, chipped in with 18 points.

The Razorbacks were without heralded five-star guard Nick Smith Jr., who is dealing with a knee issue and was held out of the game as a precautionary measure.

Grant Nelson and Boden Skunberg led the visiting Bison with 17 points each. Skunberg had 10 in the first half on his way to a career high.

The win increased the Razorbacks’ winning streak in home openers to 49 consecutive games. They have won 47 of their last 49 openers overall as they begin their 100th season.

The Hogs outscored the visitors 42-32 in the second half and led by as many as 21 points, 56-35, less than nine minutes into the period before Nelson led a late surge that closed the Bison’s deficit to 11 points before the Hogs regained the momentum and closed out the game with an 18-11 run.

The Razorbacks finished with a 44-24 advantage in points in the paint and outscored the Bison 20-11 in points off turnovers.

After three ties in the first 14:03, the Razorbacks outscored the Bison 13-5 down the stretch of the opening period for a 34-26 cushion at the halftime break. They held a brief double-digit lead at 34-24 heading into the final minute before Skunberg’s layup for the Bison closed out the scoring with 33 seconds remaining in the half.

The Hogs came out of the break firing, however, and needed less than four minutes to stretch their advantage to 48-31 to start the second half.