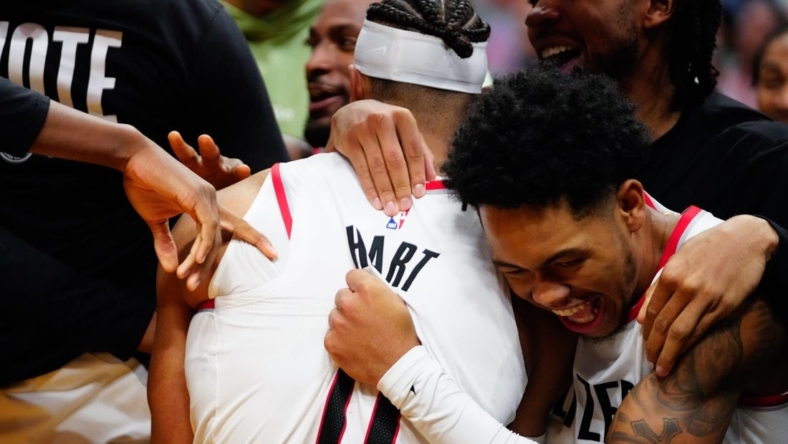 Frustrations are building for the Charlotte Hornets, and positive feelings might be the defining trait for the Portland Trail Blazers.

Just a few weeks into the NBA season, trends might be emerging.

It seems like a crucial time for the Hornets, while the Blazers will try to build more momentum on an East Coast swing when the teams meet Wednesday night at Charlotte, N.C.

It’s not just defeating the Miami Heat on Monday night that gives the Trail Blazers a spark. The win came with a second-half rally capped by Josh Hart’s winning 3-point basket as time expired in the 110-107 outcome.

“Keep grinding and keep grinding,” Portland coach Chauncey Billups said. “That’s kind of who we are now. To have a fourth quarter the way we had … one of the best quarters we’ve had all year.”

The Blazers’ momentum probably isn’t a good sign for the Hornets, who faded down the stretch in their most recent game.

“That’s one thing about this team,” said Hart, who is making contributions to the best 10-game start in Portland since the 2018-19 season. “We’re going to fight and we’re going to be gritty.”

The Hornets, mired in a five-game losing streak, can’t seem to figure out which area must be addressed the most.

“We shouldn’t lose five in a row,” forward PJ Washington said. “We’ve just got to be better, period.”

The Hornets’ offensive shortcomings have become the culprit for much of the skid, while defensive snags surfaced prominently in a 108-100 home loss to the Washington Wizards on Monday.

The offensive flow has wavered at times. There were enough positive elements to win some games.

“I actually thought when you get 70 points in the paint, you’re shooting the ball well,” Clifford said.

Charlotte’s injury woes have contributed to the situation. Point guard LaMelo Ball still has not played this season because of an ankle injury but is getting close to a return. Dennis Smith Jr. has started nine of 11 games at point guard but is dealing with an ankle issue also.

Charlotte won’t be able to let down its attention defensively against the Trail Blazers, who have shown an early knack of pulling out close games. In a four-night span, they had two buzzer-beating victories.

“I think we’re just giving the effort and energy defensively to stop teams, and that has been a major difference for us,” said Blazers standout Damian Lillard, who is averaging a team-best 29 points per game and just returned from a four-game absence because of a calf strain.