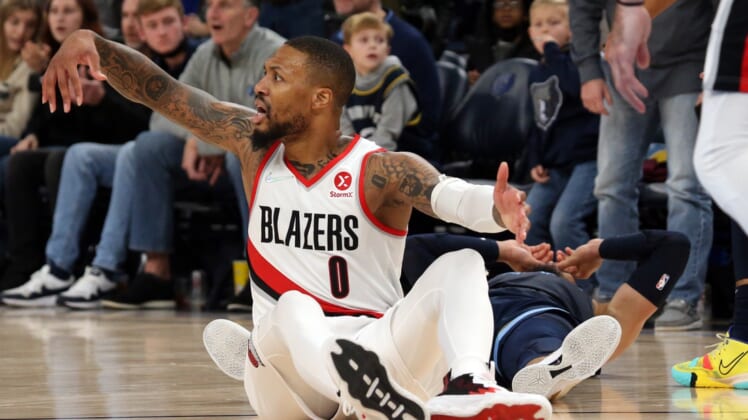 Kristaps Porzingis, Damian Lillard and two squads forced to piece their rosters together will duel Monday night when a pair of seriously undermanned Western Conference playoff hopefuls — the Dallas Mavericks and Portland Trail Blazers — hook up in Portland.

Having lost two in a row and four of five, the Mavericks will be making their second stop on a five-game trip bridging Christmas and the new year. They will pay a visit to the Pacific Northwest without Luka Doncic, Tim Hardaway Jr. and three others in COVID protocols.

Thanks in large part to Porzingis and Jalen Brunson, each of whom went for 27 points, the Mavericks were competitive in a 120-116 road loss to the Utah Jazz in the nightcap of the NBA’s Christmas card Saturday.

Porzingis added nine rebounds in the loss, while seeing his first action since leaving a game at Minnesota Dec. 19 with a toe injury.

After watching the likes of hardship pick-up Brandon Knight contribute 10 points off the bench to his club’s effort, Mavericks coach Jason Kidd walked off the Utah court with a positive vibe.

“That was one of the best teams in the league,” Kidd said of the Jazz. “I thought those guys in our locker room fought all the way to the end. The ball just didn’t bounce our way tonight.”

The Trail Blazers weren’t invited to the NBA’s Christmas Day extravaganza, and they had a game postponed Thursday against the Brooklyn Nets two nights earlier. It gave the team five days off since completing a trip to Memphis and New Orleans with a 111-97 loss to the Pelicans on Tuesday.

Lillard poured in 39 points in the defeat two nights after lighting up the Grizzlies for 32 points in a 105-100 win.

Lillard has averaged 38.0 points on 54.8-percent shooting overall and 48.4-percent accuracy on 3-pointers in his last three games. He also will be playing for the first time since getting two technical fouls and an ejection in the final seconds at New Orleans. He was proud of his team’s effort nonetheless.

“We’ve got so many injuries — guys out, guys playing that aren’t fully healthy,” Lillard said. “We’re just trying to find our way, keep our heads above water.”

Getting Lillard’s sidekick, CJ McCollum, back would help, especially with a rugged schedule ahead. After seeing the Mavericks, the Trail Blazers will face the Jazz, Los Angeles Lakers, Atlanta Hawks and Miami Heat in their next four games.

The good news is McCollum could see action in at least some of those games. The club announced over the weekend that he will be re-evaluated this week in hopes that he’ll be cleared to play after suffering a collapsed lung earlier in the month.

He has missed the last eight games.

The Trail Blazers also are without five players in the league’s medical protocols, including Robert Covington, who played 31 minutes in the loss at New Orleans.

The teams will meet for the first time this season. The home team has lost four of the last five meetings in the series, with the Mavericks prevailing 132-92 on a trip to Portland last March, when Doncic outscored Lillard 37-19.