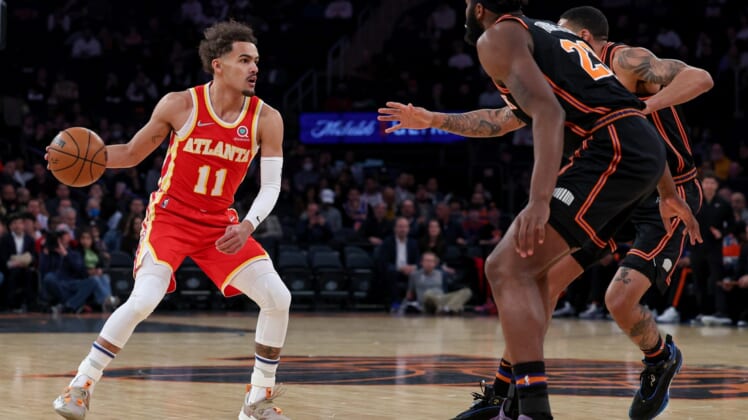 Trae Young collected 45 points and eight assists in his return to Madison Square Garden on Tuesday, fueling the visiting Atlanta Hawks to a 117-111, come-from-behind victory over the New York Knicks.

Atlanta’s Bogdan Bogdanovic and De’Andre Hunter each followed with a trey on consecutive possessions. Young’s crossover sent Taj Gibson to the floor before the Hawks star calmly sank a jumper to push the lead to 113-105 with 1:04 remaining.

Young was playing in his first game in New York since he embraced the role of the villain while scoring 36 points in Atlanta’s first-round, series-clinching victory over the Knicks in Game 5 last spring. He missed in the Hawks’ first trip back to MSG on Christmas Day due to NBA’s health and safety protocol.

Bogdanovic scored a season-high 32 points and New York native Kevin Huerter added 14 for the Hawks, who have won five of their past seven games. Atlanta also averted a sweep in the four-game season series.

RJ Barrett collected 30 points and 13 rebounds and Alec Burks added 21 points for the Knicks, who guaranteed themselves a losing season for the eighth time in the past nine campaigns.

New York played without Julius Randle, who was sidelined due to a sore right quadriceps tendon. He also was fined $40,000 by the NBA earlier on Tuesday for directing hostile language toward a game official during the Knicks’ 108-93 home loss to the Utah Jazz on Sunday.

New York opened the fourth quarter on a 10-2 run to take a 99-89 lead before former Knick Danilo Gallinari and Bogdanovic brought Atlanta back within one. The former made a 3-pointer and a mid-range jumper while the latter added a three buckets and two foul shots as the Hawks cut the deficit to 103-102 with 3:42 to go.