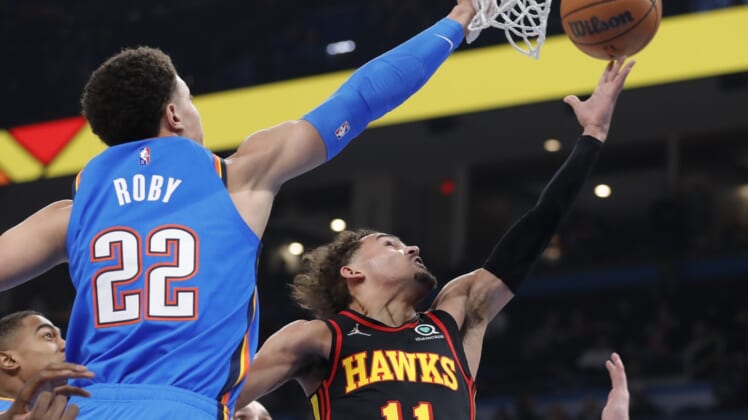 Trae Young scored 41 points and dished out eight assists to lead the visiting Atlanta Hawks to a 136-118 win over the Oklahoma City Thunder on Wednesday.

The Hawks (39-37) earned their third consecutive win and improved to 8-3 in their past 11 games as they move closer to securing a spot in the Eastern Conference play-in tournament.

Young was a regular presence at Thunder games growing up in Norman, Okla., just south of Oklahoma City.

He got off to a quick start, opening the scoring with a 3-pointer from well behind the arc to give Atlanta a lead it wouldn’t relinquish.

Beginning with Young’s opening shot, the Hawks hit 12 of 13 during a 10-minute span.

Young had 19 points and four assists during a 42-point opening quarter in which Atlanta shot 78.9 percent from the field (15 of 19).

The Hawks’ offense kept up its high-powered production in the second, though it took on a different look.

The Hawks scored 85 points before the break, the top first-half total in franchise history. Atlanta’s franchise record for points in any half is 97, set in the second half on Feb. 11, 1970, at San Diego.

The explosion came after the Hawks scored 74 points in the first half of a Monday win at Indiana.

The 85 points were the most allowed in a half in Oklahoma City franchise history.

Waters didn’t match Young’s performance, but he did lead the Thunder with a season-high 25 points. Waters, who hit a career-best seven 3-pointers, hadn’t scored more than 16 in a game previously.

Theo Maledon added 18 points and Olivier Sarr had 17 for Oklahoma City, which had just eight players available for the second consecutive game.