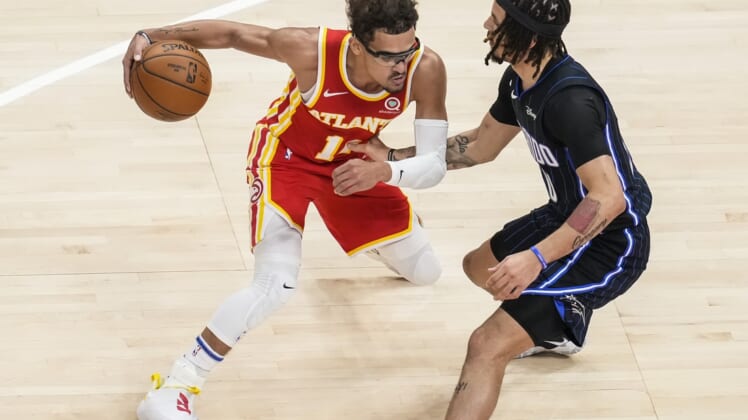 Trae Young, wearing googles for the first time due to an injury, scored 25 points and Lou Williams came off the bench to score 22 as the Atlanta Hawks defeated the visiting Orlando Magic 112-96 on Tuesday.

Young was wearing the glasses to protect his right eyelid, which was scratched in a Sunday game against the Indiana Pacers. Young never seemed comfortable — and removed the goggles a couple of times during the game — but still shot 7-for-16 from the field while compiling seven assists, five rebounds and five turnovers.

Clint Capela had 14 points and 19 rebounds for his 11th straight double-double, increasing his total to a team-leading 39.

Orlando jumped out to a quick 9-2 lead, but the Hawks surged ahead and were on top 27-24 after one quarter. Atlanta erupted for 38 points in the second quarter and led 65-48 at halftime.

The Hawks struggled offensively to start the second half and allowed the lead, which had been as many as 19 in the first half, to dwindle down to 10. Atlanta didn’t manage its first points of the half until Young’s floater with 7:41 left in the third and scored just 15 points in the period, its season low for a third quarter.

Atlanta’s lead dipped as low as six points before the Hawks took an 80-72 lead into the fourth quarter. The hosts pulled away early in the final period.