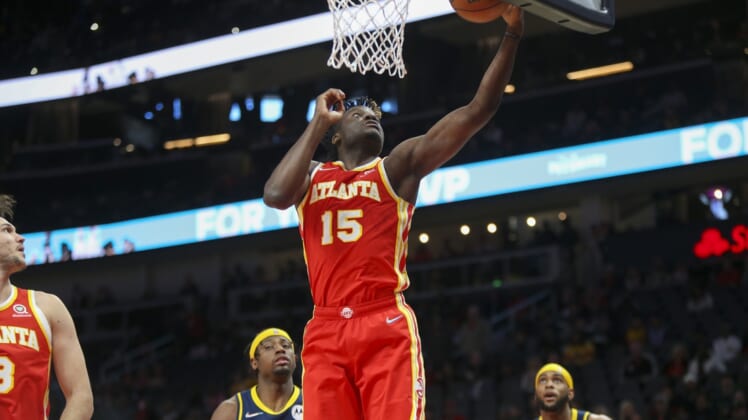 Trae Young scored 47 points and the Atlanta Hawks survived a late rally by visiting Indiana to beat the Pacers 131-128 on Sunday.

Young was 13 of 20 from the field, including seven 3-pointers, and was 14-for-14 on free throws, including four in the final 28.8 seconds to help nail down the win.

It was the second-most points scored by Young and the seventh time he’s scored 40-plus.

It was the second straight win for Atlanta and put the Hawks within a game of reaching the .500 mark. Atlanta improved to 3-0 against the Pacers this season.

The Hawks led by as many as 19, but allowed 69 points in the second half and Indiana got as close as two points when Duane Washington Jr. made two free throws with 1:09 remaining. But Young twice restored the lead to four points by hitting a pair of free throws.

Indiana had a final opportunity to tie the game with Hield made a free throw and intentionally missed the next. Atlanta’s De’Andre Hunter grabbed the rebound the deny the Pacers a last-second opportunity.

Atlanta had six other players in double figures, including Hunter and Danilo Galinari with 15 each, Kevin Huerter with 14, Bogdan Bogdanovic and Onyeka Okongwu with 13 and Clint Capela with 10.

Indiana had three players top the 20-point mark: Buddy Hield and Tyrese Haliburton with 25 each and Washington matched his career high of 22.

The Pacers, who didn’t arrive at their Atlanta hotel until 4 a.m., had only eight healthy players. The Hawks showed no mercy, running to a 37-28 first quarter by making six 3-point baskets, two of them long-range bombs from Young, who had 14 points.

Atlanta stretched the lead to 77-59 at halftime, the most first-half points it has scored this season. The Hawks scored 76 in their last meeting with Indiana.

Indiana, which had eight players on the injured list, was without starter Malcolm Brogdon (concussion protocol). The Hawks were playing without second-leading scorer John Collins, who was out with a sore right foot and a sprained right ring finger.