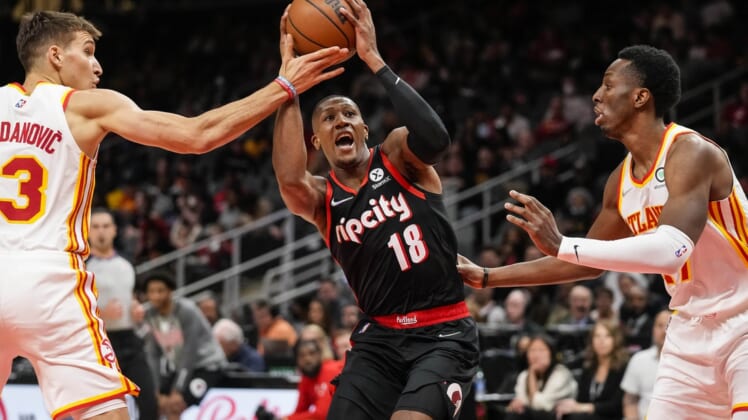 Trae Young scored 46 points and helped the Atlanta Hawks come back from a 15-point, third-quarter deficit for a 122-113 win over the visiting Portland Trail Blazers on Monday.

Young, who had 47 points against the Indiana Pacers on Sunday, sank five 3-pointers on Monday and shot 11-for-11 at the line. He had 12 assists and six rebounds as the Hawks won their third straight game.

The Trail Blazers were up 73-58 early in the third quarter before Atlanta went on a 25-4 run. Young scored 21 in the period and the Hawks led 89-84 going into the fourth quarter.

De’Andre Hunter hit a 3-pointer to give the Hawks a five-point lead, then blocked a shot at the other end that led to a Portland 24-second violation. Hunter followed with a driving layup, and the Trail Blazers never got closer than five points again.

Portland’s Josh Hart scored 31 points, with 25 of those coming in the first half as the Trail Blazers took a 67-58 lead into the break. Hart, who scored a career-high 44 on Saturday against the Washington Wizards, made 4 of 5 3-point attempts before halftime at Atlanta but went 0 of 2 from long distance in the second half.

The Hawks led by as many as seven points in the first quarter, but the Trail Blazers closed the quarter by scoring seven straight points and a 34-29 lead.