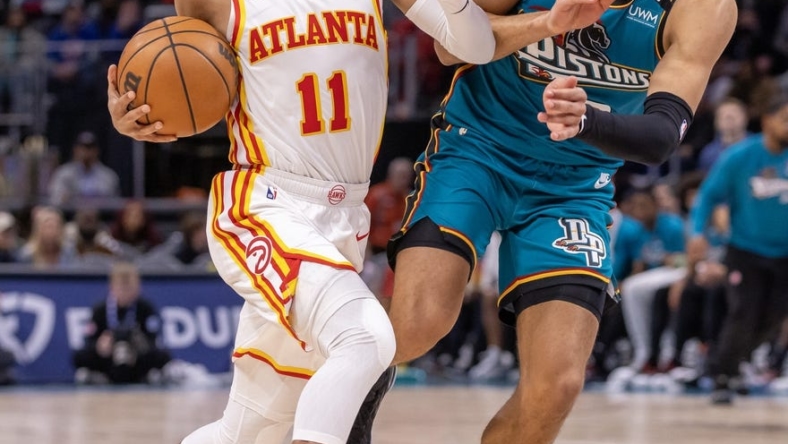 Trae Young overwhelmed the Detroit Pistons for the second time in three nights, racking up 36 points and 12 assists as the visiting Atlanta Hawks secured a 136-112 win on Friday night.

The Hawks won the first meeting in Detroit on Wednesday, 118-113, when Young scored 35 points. Young did his damage in just 30 minutes on Friday.

Dejounte Murray had 26 points, 10 in the fourth quarter. Onyeka Okongwu supplied 16 points and seven rebounds. Aaron Holiday added 14 points and De’Andre Hunter tossed in 12 for the Hawks, who are in the midst of a five-game road trip.

Murray scored 10 points in the first five minutes and Young finished the opening quarter with 11 as the Hawks took a 35-29 lead. Cunningham kept his team close with 15 points.

Cunningham continued to knock down midrange jumpers and free throws in the second quarter, finishing the half with 27 points. He picked up his third foul in the final minute just after Bogdanovic gave Detroit its first lead with a 3-pointer.

Young pumped in 23 points before the break, capped by a layup with 2.2 seconds left to give Atlanta a 69-67 halftime lead.

Atlanta scored 11 unanswered points early in the third to take an 85-74 lead. Hunter scored five of those points and Murray capped it off with a jumper. Young’s pull-up 3 with five minutes left in the quarter gave Atlanta a 90-79 advantage.

Cunningham was assessed his fifth foul with 1:32 left in the quarter. Young had 13 points during the third quarter as the Hawks led 106-94 entering the fourth.

Murray scored two baskets in the first minute of the final quarter as Atlanta quickly bumped the lead to 18 points.

Jalen Johnson knocked down a 3-pointer to push the Hawks’ lead past 20 points.