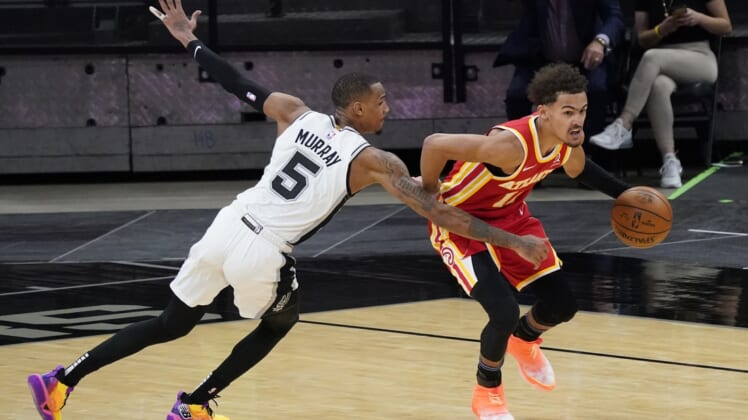 Trae Young was nearly unstoppable at the end of the night, scoring 15 of his 28 points in the two overtime periods, and Danilo Gallinari canned a clutch late 3-pointer as the Atlanta Hawks outlasted the San Antonio Spurs 134-129 in a double-overtime thriller on Thursday in the Alamo City.

Young also had seven points in the fourth quarter and racked up 12 assists in the victory.

Clint Capela and Bogdan Bogdanovic added 28 points each for the Hawks, who snapped a two-game losing streak. Capela also took 17 rebounds, and Gallinari finished with 16 points and 12 boards.

Atlanta led 107-105 before two free throws by Young with 39.5 seconds to play. Dejounte Murray countered with a three-point play with 15 seconds remaining to allow the Spurs to within one point.

After Young hit another free throw with 11.4 seconds in regulation, DeMar DeRozan sent the game into overtime with a pullup jumper in the lane with 2.7 seconds left.

The game was tied at 119 after a 3-pointer by the Spurs’ Rudy Gay with 59.1 seconds remaining in the first extra period. Both teams then missed shots before Atlanta had the overtime’s last possession, spanning the final 16.6 seconds, but could not get off a shot in time.

The Hawks built a six-point lead in the second overtime before DeRozan and Gay shot San Antonio back to within 130-129 with 33.8 seconds remaining. Young then found Gallinari in the corner, and he buried a 3-pointer with 11.8 seconds left to secure the win.

The game was the second of a home back-to-back for San Antonio, which beat Sacramento on Wednesday.

The Spurs were within 54-48 at halftime. White led the way with 14 points in the half thanks to 4 of 5 shooting from beyond the arc, and DeRozan added 10 in the first two quarters.

Capela led all scorers at the break with 18 points while Bogdanovic hit for 12.