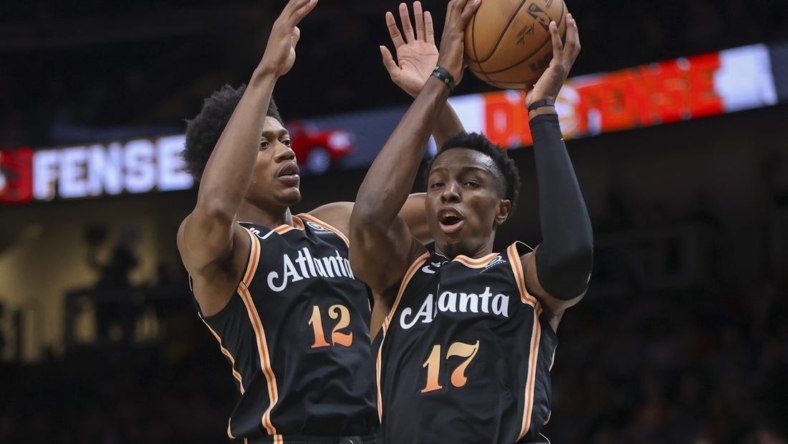 Trae Young scored 15 of his 26 points in the first quarter and the Atlanta Hawks came away with a 104-95 win over the visiting Philadelphia 76ers on Thursday.

Young made only 7 of 21 field goals and was just 2-for-8 on 3-pointers, but was perfect on 10 free-throw attempts and had seven assists.

Atlanta has won four of its last five and went 3-1 on its homestand. The Sixers have lost three of their last four games. The two clubs play again on Saturday in Philadelphia.

The Hawks have scored 100-plus points in each of their first 12 games and have hit the century mark in 33 straight regular-season contests.

Atlanta center Clint Capela added 18 points and a season-high 20 rebounds. It was Capela’s fifth straight double-digit rebound game and the third time in four games that he grabbed 19-plus rebounds. De’Andre Hunter scored 14 for the Hawks.

The Hawks scored the final 11 points of the first quarter to take a 29-20 lead into the second. But the Sixers rode the 17 first-half points from Embiid and cut Atlanta’s lead to 46-42 at the half.

The Sixers tied the game 55-55 at 5:50 of the third quarter, but the Hawks outscored them 25-11 the rest of the frame and led 80-66 at the break — their biggest advantage of the game to that point. The Sixers played much of the quarter without Embiid, who picked up his fourth personal at 7:07.

Philadelphia coach Doc Rivers removed his starters with 4:31 left and his team behind by 17. The Sixers’ subs cut the lead to six and the Sixers re-inserted Embiid down by eight with 1:28 remaining. But Embiid was limited to one made free throw over the remainder of the game.