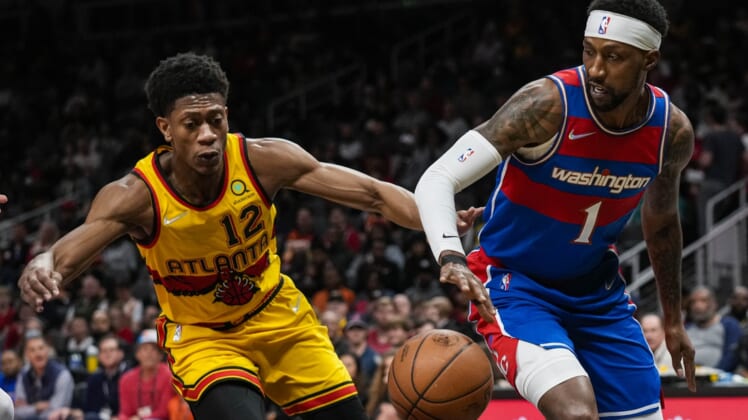 The Atlanta Hawks kept pace with the Brooklyn Nets in their duel for the No. 8 playoff seeding in the Eastern Conference play-in tournament Wednesday night, riding Trey Young’s 30-point performance to a 118-103 victory over the visiting Washington Wizards.

The Wizards (35-45), who were coming off a win at Minnesota on Tuesday but have been eliminated from playoff contention, fell despite a 26-point, 18-rebound night from Kristaps Porzingis.

In bouncing back from a 118-108 loss at Toronto on Tuesday, the Hawks erupted for 40 first-quarter points, including 17 of the period’s final 24 after Ish Smith had put Washington on top 24-23 in the eighth minute.

Washington hung within 83-79 late in the third quarter, but again Atlanta saved its best for last in the period, getting all 12 points from Young — including a pair of 3-pointers — in a 12-4 burst that opened a 12-point advantage.

Shooting for a sixth victory in their past eight games, the Wizards got no closer than eight over the final 12 minutes.

Young used 11-for-12 accuracy at the free-throw line as the foundation for his 34th 30-point game of the season. He also found time for a game-high 11 assists, completing his 41st double-double of the year, his 20th with at least 30 points.

Danilo Gallinari backed his star teammate with 4-for-7 shooting from 3-point range while racking up 26 points and 10 rebounds. The Hawks outscored the Wizards 48-30 from beyond the arc.

Clint Capela chipped in with 19 points, Bogdan Bogdanovic 18 and De’Andre Hunter 10 for the Hawks, who finish the regular season with two on the road, visiting Miami on Friday and Houston on Sunday.

Washington’s Corey Kispert and Daniel Gafford added 12 points apiece. The Wizards get one more chance to play playoff-position spoiler when they wrap up the season at Charlotte on Sunday following a home game against New York on Friday.