Trade Deadline: Get to know these 12 names 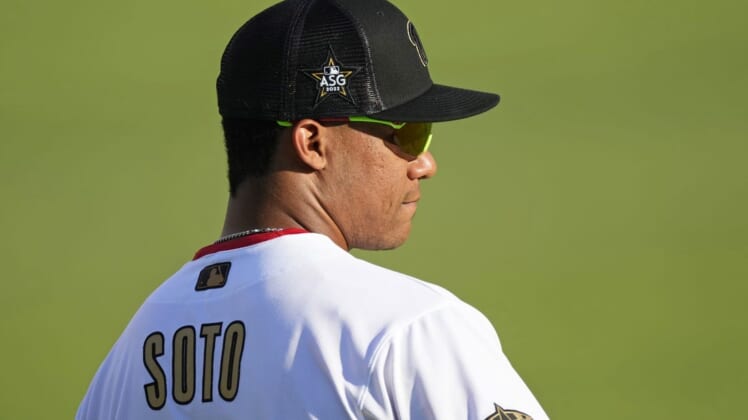 Now that the All-Star Game is over, all eyes are turning to Aug. 2 and the Major League Baseball trade deadline. While the long-term destination of Washington Nationals outfielder Juan Soto is the dominant topic, he’ll be joined on the market by plenty of stars who could make the difference in pennant races that are more wide open than ever thanks to the expansion of the playoff field. Here’s a look at six players likely to be dealt over the next 13 days, as well as six prospects who could be dangled by teams looking to make that championship-winning trade.

VETERANS WHO COULD BE TRADED

Juan Soto, Nationals OF: Soto, who turned down a 15-year deal worth $440 million earlier this month, will be the main story of the deadline regardless of whether or not he’s dealt. Trading a 23-year-old superstar still two-plus years from free agency is a complicated endeavor that might best be completed in the offseason, but the Nationals were aggressive in tearing it down by trading franchise icons Max Scherzer and Trea Turner last July. Add into the equation the impending sale of the team and general manager Mike Rizzo may not have any choice but to move Soto now. Whenever Soto goes, the haul will be historic.

Frankie Montas, Athletics SP: The irony is the dismantling A’s might have waited too long to deal Montas, who hasn’t pitched since July 3 due to right shoulder inflammation. Montas is scheduled to start Thursday as Oakland opens the second half and could be moved quickly if his velocity is back and he looks healthy. With a 3.26 ERA and 100 strikeouts in 96 2/3 innings despite a 3-9 record, Montas is a prime candidate to have a Doyle Alexander-esque impact on a new team.

Luis Castillo, Reds SP: Castillo began the season as a question mark due to his own right shoulder injury, but he’s gone 2-2 with a 2.20 ERA and 64 strikeouts over 57 1/3 innings in his last nine starts dating back to May 31. In three starts this month, Castillo has given up just one run over seven innings in each of his first three starts this month against the Braves, Rays and Yankees. With those performances against contenders and Montas’ uncertain health, Castillo should be the most in-demand — and expensive — pitcher on the market. As with Montas, any team acquiring Castillo will get him for two pennant races.

Willson Contreras, Cubs C: Last one out, shut off the lights. The dissolution of the dynasty that never was will be complete once Contreras, an impending free agent and the final everyday player from the 2016 World Series champions, is dealt. Power-hitting catchers are at a premium, so Contreras — who entered the All-Star break tied with Sean Murphy for the most plate appearances among catchers (339) this season and ranked among the top five since 2016 in both homers (108) and slugging percentage (.458) since 2016 — should fetch a big return from a contender looking to shore up its backstop situation.

C.J. Cron, Rockies 1B: Cron is a first-time All-Star and in the first season of a two-year deal, but for the sub-.500 Rockies, there might be no better time than now to trade the slugger, who is one of just a dozen players with at least seven 15-homer seasons in the last eight years. One caveat for teams looking to upgrade at designated hitter or first base: Cron’s home/away splits are cavernous even by the standards of a Rockies player. He’s hitting .352 with 16 homers, 53 RBIs and a .674 slugging percentage at Coors Field and .229 with five homers, 16 RBIs and a .399 slugging percentage on the road.

Whit Merrifield, Royals OF: The Royals signed Merrifield through 2023 with an option for 2024 in hopes he’d be the centerpiece of their next contender, but Kansas City — on pace for its sixth straight losing season — is likely to deal the 33-year-old before his value completely evaporates. Merrifield is in the midst of his worst season and just had his consecutive games streak snapped at 553 due to a bone bruise in his toe, but the three-time American League stolen base champ would be an intriguing pickup for a team looking for a sparkplug atop its lineup. One potential wrinkle is the COVID vaccination status of Merrifield, who was one of 10 Royals to miss their trip to Toronto because he hasn’t been vaxxed.

PROSPECTS WHO COULD BE ACQUIRED

Anthony Volpe, Jasson Dominguez and Estevan Florial, Yankees: Including all three vaunted prospects here because if the Yankees are going to get Soto, they’ll probably need to deal at least two of them. But the lone blockbuster Brian Cashman has pulled off over the last several years was the no-risk trade for Giancarlo Stanton, which only cost the Yankees a pair of fringe prospects plus Starlin Castro (and the willingness to pay all but $30 million of the almost $289 million due on Stanton’s deal through 2027). Volpe, the top shortstop prospect in baseball, and Dominguez, who is nicknamed “The Martian,” are expected to be Yankees cornerstones well into the 2030s, so it’s more likely the club makes a smaller deal and trades Florial, who is hitting .300 with 12 homers and 28 stolen bases at Triple-A but is blocked in the outfield for the foreseeable future.

Francisco Alvarez, Mets C: Alvarez might be the Mets’ most promising position player prospect since David Wright and has already earned praise from aces Max Scherzer and Jacob deGrom, both of whom threw to Alvarez during recent minor league rehab starts. The Mets likely wouldn’t part with him for anyone other than Soto, but nothing can be ruled out under new owner Steve Cohen, who is far more aggressive than Hal Steinbrenner and is on record as wanting to win a championship in his first five seasons in Queens.

Miguel Vargas, Dodgers IF: The Dodgers traded AL MVP candidate Yordan Alvarez and NL Rookie of the Year candidate Oneil Cruz in consecutive deadlines at 2016 and 2017 yet still have a top-10 system per Baseball America. There’s no obvious spot on the big league roster for Vargas, but the 22-year-old budding multi-position star and Futures Game selection could be quite attractive to a rebuilding team after hitting .295 with 13 homers and 64 RBIs while starting at first base, second base, third base and left field for Triple-A Oklahoma City.

Robert Hassell III, Padres OF: The Padres’ A.J. Preller might be the most aggressive general manager in the game and will surely be in the mix for Soto if the Nationals move him this month. Even if Soto stays put for now, Preller will be looking to spark a win-now team that’s gone 11-17 and lost a whopping 10 1/2 games in the standings to the Dodgers since June 17. Hassell is a high-end talent — he’s hitting .311 with nine homers, 49 RBIs and 19 stolen bases as a 20-year-old in Class-A — who could be dangled in a less splashy trade while allowing the Padres to hold on to their consensus top prospects, shortstop C.J. Abrams and catcher Luis Campusano, for a potential pursuit of Soto.