SPOKANE, Washington — It started out, as it sometimes does, as a Cinderella story.

Gonzaga, the little Jesuit school from Spokane, Washington, with a name many seemed to pronounce wrong, advanced to the Elite Eight of the 1999 NCAA Tournament before falling to eventual national champion UConn.

But unlike Cinderella, Gonzaga hasn’t left the Big Dance in the two-plus decades since.

As announcer Gus Johnson bellowed back then, “The slipper still fits!”

But, my, how things have changed.

That 1999 team was made up of a bunch of kids from the Pacific Northwest. 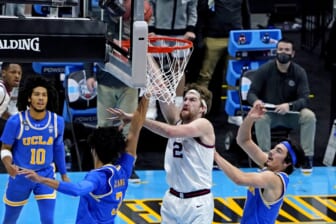 Tuesday, the Zags open their season with the nation’s No. 3 recruiting class according to 247sports (behind Memphis and Michigan), led by the top overall prospect, 7-footer Chet Holmgren. He is aptly described as a “unicorn.”

Add combo guard Hunter Sallis and point guard Nolan Hickman, both five-star recruits and among ESPN’s top 25 players in the class, and you can see why GU is ranked No. 1 in the Associated Press’ preseason poll and a favorite to return to the national championship game, in which it suffered its only defeat last season – 86-70 to Baylor.

“There’s no question who has recruited by far the best in America, that’s Mark Few and Gonzaga,” Kansas coach Bill Self said recently.

Former assistant Tommy Lloyd, now the head coach at Arizona, helped the Zags continue their streak of NCAA runs by recruiting worldwide, getting players from 17 different countries. Ronny Turiaf, Domantas Sabonis, Kelly Olynyk, Killian Tillie and Rui Hachimura are a few of the players who arrived with name tags and left as NBA draft picks.

“Necessity is the mother of invention,” Lloyd told Yahoo Sports. “Basically, we had to find a way to get more talented players than we were able to get in Eastern Washington. So we started putting time into international recruiting and developing relationships. We had guys come and be successful, so we developed a track record.” 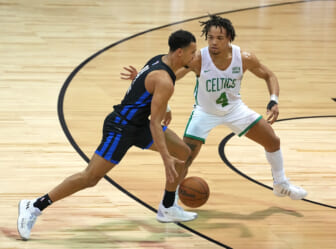 Collins helped Gonzaga break through and reach the 2017 NCAA title game, in which it narrowly lost to North Carolina, then became the program’s first one-and-done player (Suggs was the second). Collins was also the first Zags player selected in the top-10 in the NBA draft since Adam Morrison went No. 3 overall in 2006.

Now the Zags produce a first-round pick nearly every year, including two in 2019 when Hachimura was selected ninth and Brandon Clarke 21st.

And Suggs “slipped” to No. 5 in this year’s draft after being considered a likely top-three pick.

“I think they’re going to get more top-tier players now,” Syracuse coach Jim Boeheim told Yahoo. “That’s why they’re not just good, they can win the tournament. That’s the difference. You have to have a couple of those guys who develop into NBA players. That’s the difference in their team.”

The Zags’ current roster has six of the top nine highest-rated recruits in school history.

The same day in mid-April that Suggs declared for the NBA draft, Holmgren, his former teammate at Minnehaha High in Minnesota, announced his commitment to the Zags.

“There were a lot of different factors,” said Holmgren, who figures to pair with reigning Karl Malone Award winner Drew Timme to give GU one of college’s top frontcourts. “How close I am with Jalen and him going there definitely played a part in it.” 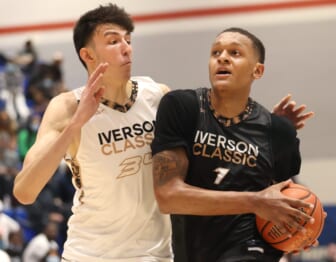 Few remains adamant about finding players that “fit” at Gonzaga, not just those that are highly rated.

“We kind of put the whole foundation of the program based on (chemistry) and player development,” Few said last spring. “When you come here, you’re going to have a key to the gym. Twenty-four hours a day, you can get in any time you want. Turn on the lights and shoot and work out and do whatever. Those have been the two pillars, and they are what is attractive to the guys that we end up getting. And we always end up getting those types of guys. That might mean not getting some other guys that we even wanted in the recruiting process. But we didn’t get them because maybe they didn’t really value that.”

At first, Few wasn’t sure if Suggs was one of those players. But when the coach realized Suggs was serious about coming to GU, Few put on a full-court press to get him.

Maybe that was the move that transformed Gonzaga’s recruiting.