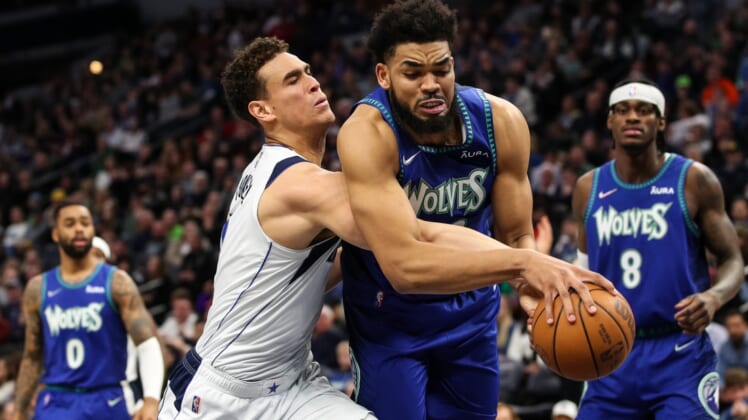 Karl-Anthony Towns collected 20 points and nine rebounds to lift the host Minnesota Timberwolves to a 116-95 victory over the Dallas Mavericks on Friday in Minneapolis.

Towns didn’t look the worse for wear despite being listed as questionable for the game due to a right forearm contusion. Towns bolted out of the blocks by scoring 13 points in the first quarter before battling foul trouble.

Jordan McLaughlin scored 16 points and D’Angelo Russell added 15 for the Timberwolves (43-32), who snapped a two-game skid and avenged a 110-108 setback over Dallas on Monday. Taurean Prince had 14 points, while Anthony Edwards and Jarred Vanderbilt each added 12 in the win.

All was not rosy for Minnesota, which saw Malik Beasley suffer a sprained left ankle in the second quarter. He did not return to the contest.

Luka Doncic recorded 24 points, 10 rebounds and eight assists. However, he joined Prince in being whistled for a technical foul as time expired in the third quarter. Doncic has 15 technical fouls on the season, with the next one earning him an automatic one-game suspension.

Dallas remained tied with the fourth-place Utah Jazz, who dropped a 107-101 decision to Charlotte on Friday. The Jazz hold the tiebreaker for home-court advantage in the first round of the Western Conference playoffs entering their clash versus the host Mavericks on Sunday.

Minnesota enjoyed an 11-point lead at halftime before doubling the advantage in the third quarter. Edwards scored eight points in the third and Dallas didn’t help itself following a brutal 1-for-14 showing from 3-point range.

Edwards made a layup and McLaughlin sank a 3-pointer and a 10-foot bank shot to push the Timberwolves’ lead to 102-78 with 6:01 to play in the fourth quarter.

Spencer Dinwiddie recorded a three-point play, a blocked shot and a 3-pointer during a surge as the Mavericks trimmed the Timberwolves’ lead to two points early in the second quarter. Undaunted, Minnesota finished with a flourish to seize a 61-50 advantage at halftime.