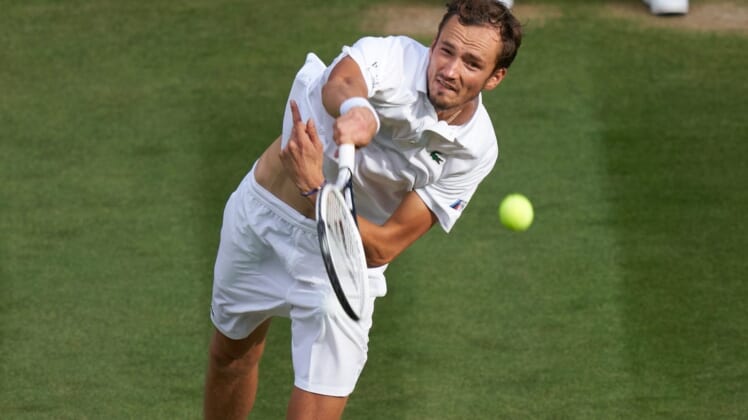 The two major tours announced Friday that they will not award player ranking points for Wimbledon this year due to the All England Club’s ban on players from Russia and Belarus.

The All England Club previously announced players from the two countries could not play in the Grand Slam event this year due to Russia’s invasion of Ukraine.

The ATP and WTA criticized the decision at the time and star men’s players such as defending Wimbledon champ Novak Djokovic and Rafael Nadal also were outspoken.

With the start of Wimbledon just 5 1/2 weeks, the men’s tour condemned the discrimination against Russian and Belarusian players. It said it was removing the rankings points “with great regret and reluctance.”

“The ability for players of any nationality to enter tournaments based on merit, and without discrimination, is fundamental to our tour,” the ATP said in a statement. “The decision by Wimbledon to ban Russian and Belarusian players from competing in the U.K. this summer undermines this principle and the integrity of the ATP ranking system. …

“Our rules and agreements exist in order to protect the rights of players as a whole. Unilateral decisions of this nature, if unaddressed, set a damaging precedent for the rest of the tour. Discrimination by individual tournaments is simply not viable on a tour that operates in more than 30 countries.”

“Nearly 50 years ago, the WTA was founded on the fundamental principle that all players have an equal opportunity to compete based on merit and without discrimination,” Simon said in a statement. “The WTA believes that individual athletes participating in an individual sport should not be penalized or prevented from competing solely because of their nationalities or the decisions made by the governments of their countries.”

The All England Club has said that it followed advice from the British government as part of its decision process. It said Friday night that it stands by the decision to ban Russian and Belarusian players.

“Given the position taken by the UK Government to limit Russia’s global influence, which removed automatic entry by ranking, and the widespread response of Government, industry, sport and creative institutions, we remain of the view that we have made the only viable decision for Wimbledon as a globally renowned sporting event and British institution, and we stand by the decision we have made,” the All England Club said.

Among the Russians who won’t be playing at Wimbledon are world No. 2 Daniil Medvedev and No. 7 Andrey Rublev.

Shortly after the attacks in Ukraine began, Rublev wrote “no war please” on a television camera lens after winning a match in Dubai.

On the women’s side, No. 7 Aryna Sabalenka and No. 15 Victoria Azarenka of Belarus and No. 20 Daria Kasatkina of Russia are among the banned players.