Tough at home, Cavaliers brace for Joel Embiid and 76ers 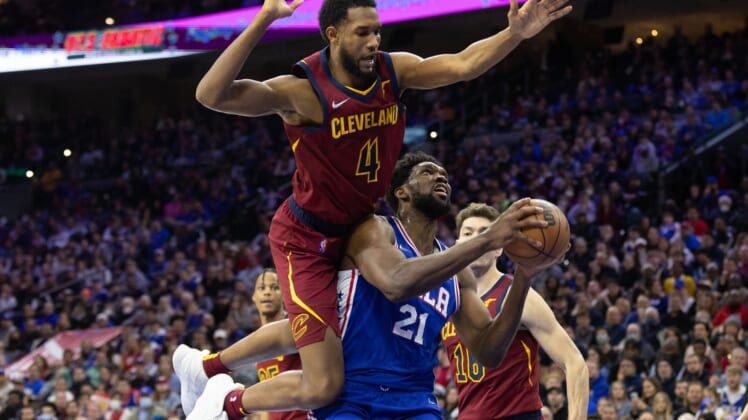 The Cleveland Cavaliers are desperately trying to hang onto the sixth spot in the Eastern Conference playoff race.

They began a five-game homestand with a 120-111 overtime victory over the Los Angeles Clippers on Monday.

Things won’t get any easier for the Cavs on Wednesday when they host the Philadelphia 76ers. The Sixers have won five of their last six road games but are coming off a 114-110 home loss to the Denver Nuggets on Monday.

They are still missing several key performers, including All-Star center Jarrett Allen, who would have been handy to have against Philadelphia MVP candidate Joel Embiid. Allen is out, perhaps for the rest of the regular season, with a fractured finger.

The task of covering the 7-foot, 280-pound Embiid, currently leading the NBA in scoring at 29.9 points per game, will fall into the lap of Cavs rookie Evan Mobley.

The 7-foot, 215-pound Mobley is coming off his best scoring game as a professional with 30 points against the Clippers.

“He can change a game,” Cleveland coach J.B. Bickerstaff said. “He is elite with his timing and quickness.”

Even though he can look Embiid in the eye, he lacks bulk. There is a 65-pound difference between the two big men.

Embiid took a hard fall with 3:13 left in the Denver game. Nuggets forward Jeff Green was assessed a flagrant foul for knocking Embiid to the floor. The five-time All-Star landed on his tailbone. He finished the game but may have been sore afterward.

Embiid held onto the league scoring lead with 34 points while going against reigning MVP Nikola Jokic.

“From big man to big man, I’m happy that when you look at who’s dominating the league, and really who the best players are, you got really all big men,” Embiid said recently. “Whether it’s Giannis (Antetokounmpo), me, Jokic, KD’s (Kevin Durant) not a big, but he’s 7 feet, and it’s also foreign guys.”

The Cavs might try to give Mobley some help on the defensive end, but that’s a tricky proposition when playing a team like the Sixers.

Guards James Harden — who fell one rebound short of a triple-double with 24 points, nine rebounds and 11 assists against Denver — and rapidly emerging Tyrese Maxey are major offensive threats.

Philadelphia will have to game plan against Cavs guard Darius Garland, who has scored at least 24 points in 10 of his last 11 games. He has 21 double-doubles on the season, including 24 points and 13 assists against the Clippers on Monday.

The Cavaliers also got 20 points, five rebounds and five assists from Isaac Okoro, which Bickerstaff called a “gritty” performance.