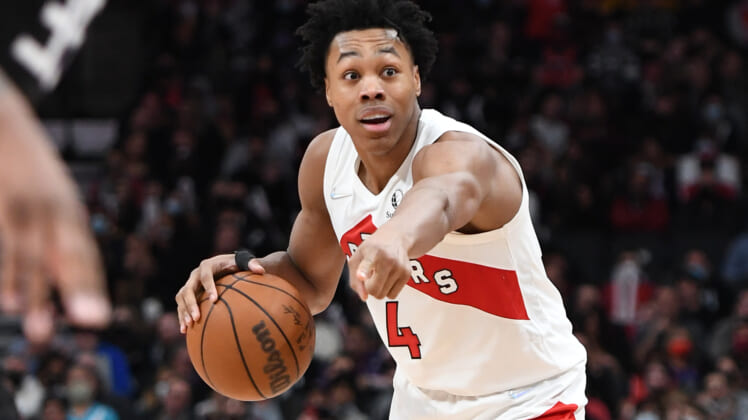 Superficially speaking, the 2021-22 Toronto Raptors are a competitive team with playoff upside. They’re just one season removed from making the playoffs for a seventh consecutive season. However, when putting the magnifying glass closer to this franchise, there’s a lot more percolating than meets the eye.

Head coach Nick Nurse has a young team with players who have continually improved and in many cases are just getting started. The organization is in a situation where they have all the tools to pull off a blockbuster trade, whether it be before this season’s NBA trade deadline or in the offseason.

Here’s how the Raptors are positioned to make an impact trade.

Toronto Raptors have a deep rotation

Whether one looks at it from a skill set or production standpoint, the Raptors have a plethora of reliable, two-way players, many of which haven’t reached their ceiling.

Pascal Siakam has been a sturdy, All-Star-caliber player for the better part of the last three years. Fred VanVleet is a reliable shooter and facilitator who holds his own on the defensive end. OG Anunoby has become a highly efficient shooter and scorer. Scottie Barnes has justified being the fourth selection in the 2021 NBA Draft, producing and making an impact on both ends of the floor.

Gary Trent Jr. is an offensive spark plug. Chris Boucher is an athletic big man fresh off an eyebrow-raising 2020-21 season. Khem Birch is a bouncy, big man. Precious Achiuwa is hitting the boards at a high level. Malachi Flynn can stretch the floor. President Masai Ujiri has assembled a roster of players who can start in a bind.

Yes, we’re taking about a 14-15 team, but when considering that the Raptors were 27-45 last season, they’re getting back to being a player in the Eastern Conference. More specifically, they have a young roster with players who have continually made progress in both the starting five and off the bench.

Toronto can make an extremely compelling trade offer for a star player with this group. They also have all of their first-round draft picks for the foreseeable future.

Time and time again, the Raptors have internally replaced high-impact players. When Kawhi Leonard left for the Los Angeles Clippers, Siakam became the go-to scorer. Kyle Lowry was moved in a sign-and-trade with the Miami Heat last offseason, and the Raptors have filled his scoring void with their bevy of frontcourt scorers.

VanVleet and Anunoby epitomize the Raptors’ ability to develop talent. Once a backup guard whose minutes gradually increased, VanVleet got the starting nod after Danny Green followed Leonard out the door in the summer of 2019. The rest is history, as VanVleet became the team’s floor general. By the way, he was undrafted out of Wichita State.

Three years ago, Anunoby was mostly an impact defender in the Raptors’ 2019 NBA Finals run. Then he added a more efficient perimeter game to his arsenal. Last season, Anunoby began to chime in more on the offensive end, as a whole. In the present, he has been quite possibly their best scoring option. Anunoby was the 23rd pick in the 2017 NBA Draft.

There’s some parity between those in the starting five and the second unit. For instance, Boucher can put the ball on the floor like Siakam. Flynn is a steady shooter like VanVleet. Some of the players coming off the bench could be what Siakam and VanVleet were in being the next big thing for their rotation.

The Raptors have moved and replaced key players in the past, albeit under different circumstances. They can do it again.

Toronto Raptors can be NBA contenders in 2022-23 season

At some point, an NBA franchise determines whether it’s closer to winning the NBA Finals or getting the number one pick in the NBA Draft and acts accordingly. Toronto is closer to the former than the latter.

The Raptors have budding youngsters and a handful of fundamentally sound players: why should they make a trade? Toronto has been somewhat reserved over the last year, operating like sellers to a fault. For instance, they traded Norman Powell to the Portland Trail Blazers for a package headlined by Trent, who has been a minor, if any drop-off for their rotation, but let Lowry hit free agency before sign-and-trading him to the Heat.

In all likelihood, a trade would involve the Raptors landing a star guard. Maybe that player is CJ McCollum? Perhaps they make a bold move for De’Aaron Fox, moving VanVleet to the off-guard? In either scenario, they can include Goran Dragic’s expiring contract — if they execute a trade during the regular season — alongside some combination of Trent, Boucher, Achiuwa, Flynn, Birch and draft picks. All the while, they’d still have a handful of starters and rotation players who possess invaluable playoff experience.

The Raptors could very well sit back, let their homegrown players continue to grow and bank on that getting them back in the mix. On the other hand, there are several once-rebuilding teams in Eastern Conference contention and/or operating as such in their transactions like the Chicago Bulls, Atlanta Hawks and Cleveland Cavaliers. That’s not to mention the presence of established contenders like the Milwaukee Bucks and Brooklyn Nets.

If Toronto moves even as much as a third of its roster, they’re not going to suffer. Again: they have the depth and player development track record to replace those they move. The next 12 months is the time for the Raptors to make a franchise-altering move. Their prospects have ever-improving value, and their team continues to make collective strides. A blockbuster trade would put this team back in contention next season.