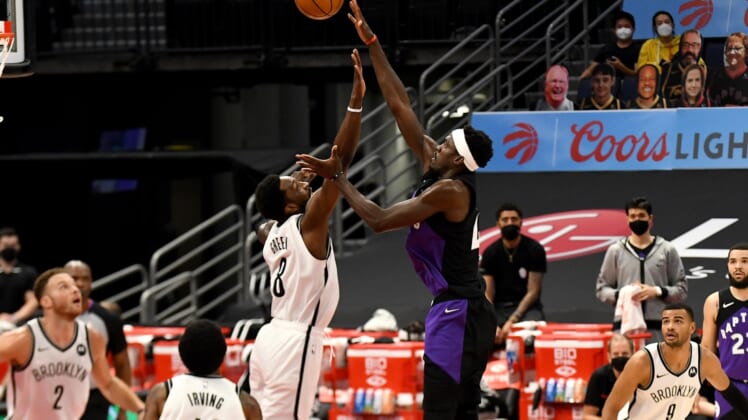 OG Anunoby scored 25 points for the Raptors, who have won both games against the Nets this season with one more to play. The Raptors have won 11 straight home games over the Nets.

Kyrie Irving had 28 points, 11 rebounds and eight assists for the Nets. Bruce Brown had 21 points and 14 rebounds.

Joe Harris had 14 points and Landry Shamet had 10.

The Nets were without Kevin Durant (thigh) and James Harden (hamstring). Toronto’s Chris Boucher, who had four points and seven rebounds, left the game early in the fourth quarter with a left-knee sprain and did not return.

The Raptors led by as many as 18 points during the third quarter and took an 11-point advantage into the fourth.

The Nets scored the first five points of the fourth. Toronto built the lead to 15 points on Siakam’s jumper with 7:37 remaining.

VanVleet made two free throws to increase the lead to eight with 1:39 to go. Khem Birch’s 3-pointer made the lead 11.

Brooklyn led 36-23 after one quarter.

The Nets led by 12 points with 4:37 to play in the second quarter, but VanVleet’s 3-pointer cut the lead to six with 3:39 remaining. Lowry’s 3-pointer with 36 seconds to go completed the first-half scoring as Toronto finished with a 17-7 run. The Nets led 58-56 at halftime.

Lowry gave the Raptors the lead with a 3-pointer. Anunoby followed with a dunk and Siakam hit a jumper to increase the lead to six with 9:37 to play in the third quarter. Siakam made a 3-pointer and a jumper consecutively to give Toronto an 87-72 lead.