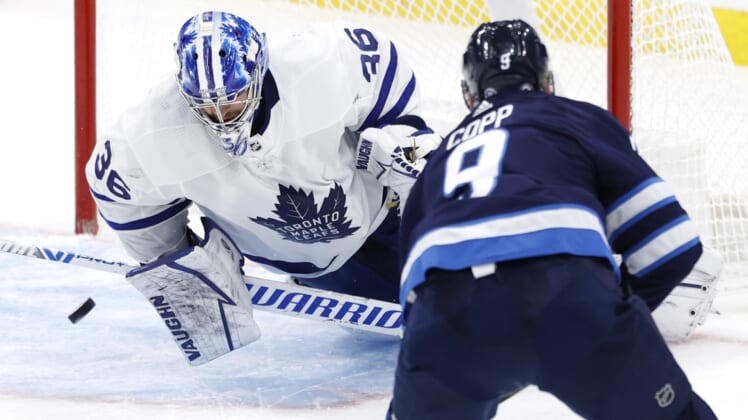 Elite teams win even with their ‘B’ game. The Toronto Maple Leafs found that extra gear when it counted in Sunday’s 4-2 road win over the sputtering Calgary Flames and expect the same of themselves when the two teams meet again on Monday, but with better execution en route to a win.

“I think we looked a little sluggish at times,” captain John Tavares said after his team broke open a tied game with a pair of third-period goals. “But I really like the way we stuck with it and (found) a way to play a harder type of game to really earn more pucks, win some more races, and really get to their net.”

The Maple Leafs have won three straight games and are on a 6-0-1 roll that has strengthened their perch atop the North Division. Moreover, they have a 7-0-1 mark in games in Alberta this season, including a trio of wins in Calgary.

Tavares and Auston Matthews had a huge hand in extending that success. Tavares netted the game-winner a couple of minutes before Matthews rounded out the scoring with his league-leading 25th goal of the season. Matthews is the first player in franchise history to score 25 or more goals in each of their first five seasons.

“We defended really well and played a quicker game in the third, which I think allowed us to take control,” Tavares explained. “There’s going to be nights when you don’t have your best, but you’ve got to work and compete and find ways to get your game going. I think we did that.”

The Maple Leafs are expected to turn to goaltender Jack Campbell on Monday. Campbell has an 8-0-0 record, one win shy of Felix Potvin’s mark for victories to start a season.

“We’ll have to see on that,” coach Sheldon Keefe said. “We’ll see how he gets through the morning skate tomorrow and make the decision there, but we’re hopeful that that’s going to be the case.”

The Flames are mathematically alive in the playoff fight, but barring a total collapse by the Montreal Canadiens and a massive winning spree, punching a ticket to the second season is a pipe dream. Calgary sits six points back of fourth-place Montreal, and the Canadiens have five games in hand.

The Flames have five games scheduled against Montreal among the 17 remaining on the schedule, but any chance to make up ground in those clashes won’t exist with the track they’re on. Calgary has lost three straight games and seven of eight, all in regulation time.

Making their swoon even worse is the fact the Flames held a lead in each of their last three losses. The last two were tied 2-2 before they fell.

Giordano’s milestone is no small feat, even if he didn’t feel much like celebrating. He is only the fifth undrafted defenseman since the universal draft began in 1969 to reach 500 points.

However, the losing is wearing on him and the team that’s faltering when other teams are finding another gear.