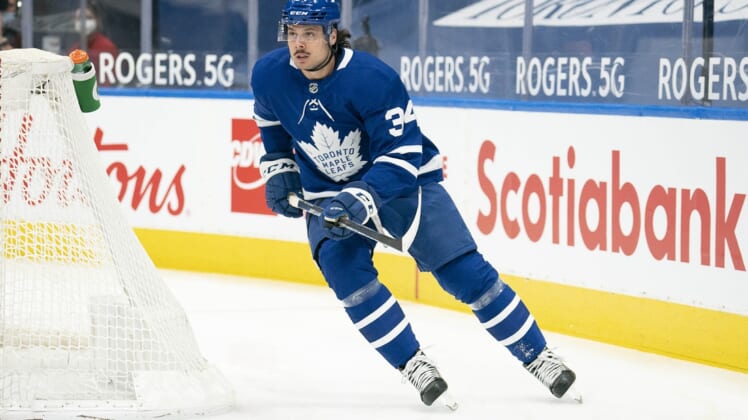 After getting some extra breathing room atop the North Division standings, the Toronto Maple Leafs look for their second consecutive road win over the Winnipeg Jets on Friday.

Toronto rode a strong start to victory in Wednesday’s 3-1 win over the Jets. The Leafs scored twice and outshot Winnipeg by a 14-6 margin in the first period, perhaps taking advantage of a somewhat tired Jets team.

It was the Jets’ first time on home ice since March 17, after completing a road trip that saw the club play seven times in 12 days.

“I was worried about this one right from the day the schedule came out,” Winnipeg coach Paul Maurice said, though he felt his team rebounded after that tough opening frame.

“We looked good in the second (period), but you could see signs that we were having a hard time getting a handle on some pucks….There was nothing in that game that made me feel we were way off, but we weren’t as good as we’ve been.”

Blake Wheeler is questionable for Friday after not returning to Wednesday’s game after the first period. Maurice specified that Wheeler’s undisclosed issue wasn’t related to COVID-19, saying the Jets captain “just wasn’t feeling right, so we wanted to be careful with it.”

The Jets’ comeback efforts against the Leafs weren’t helped by 10 minutes of penalty-killing time, though they were able to hold Toronto scoreless on all five power-play chances.

Winnipeg was the last team to surrender a power-play goal to the Maple Leafs, an Auston Matthews marker in the Jets’ 4-3 win over the Maple Leafs on March 9. Since Matthews’ score, the Leafs are 0-for-24 with the man advantage, a drought that has now stretched beyond nine full games.

Despite the faulty power-play unit, Toronto is 4-0-1 in its last five games. Wednesday’s victory extended the Leafs’ division lead to three points over second-place Winnipeg.

Jack Campbell stopped 26 of 27 Jets shots to continue his outstanding season. The Maple Leafs goaltender is a perfect 7-0-0 with a .948 save percentage and 1.41 goals-against average through seven games.

Campbell is likely to start again on Friday, though the Leafs could turn to backup Michael Hutchinson as part of their efforts to manage Campbell’s workload. Since Campbell has missed so much time this season with lower-body injuries, the Maple Leafs have been cautious about the goalie’s usage in games and practices.

“As a competitor and a teammate, I feel bad sometimes. I get days off when the other guys are grinding,” Campbell said. “It just puts more fire in my belly to perform when I get called upon. But, I trust the staff and what they decide to do, and obviously it’s something I need to really take seriously now.”

Toronto’s Mitch Marner and Winnipeg’s Kyle Connor are on identical four-game points streaks. The two players have each recorded a goal and five assists over their last four outings.

The Maple Leafs are 3-2-0 in five previous meetings with the Jets this season.