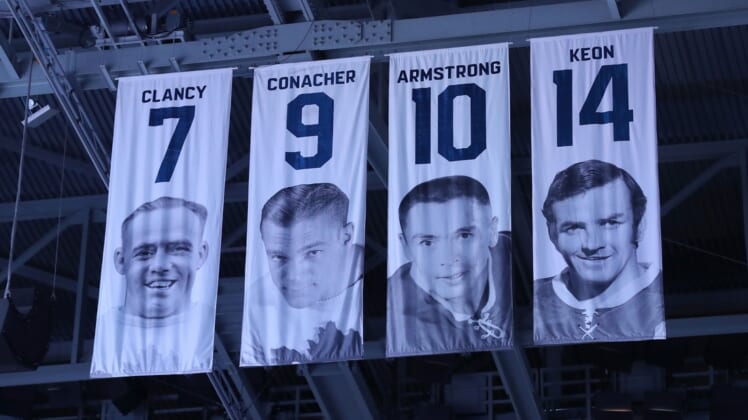 Nov 25, 2017; Toronto, Ontario, CAN; The honored numbers of former Toronto Maple Leafs players King Clancy (7) and Charlie Conacher (9) and George Armstrong (10) and Dave Keon (14) hang from the rafters before the start of the game against the Washington Capitals at Air Canada Centre. The Capitals beat the Maple Leafs 4-2. Mandatory Credit: Tom Szczerbowski-USA TODAY Sports

Former Toronto Maple Leafs captain George Armstrong, who played his entire 21-year NHL career with the team, died on Sunday. He was 90.

The team announced that Armstrong had died, but did not reveal a cause of death.

One of the first players of Indigenous descent to play professional hockey, Armstrong signed with the Maple Leafs in 1946. He played on the team from 1949-1971 and also served as a coach from 1988-89 after owner Harold Ballard fired John Brophy.

Armstrong, who spent 12 seasons as Toronto’s captain, helped the club capture four Stanley Cup titles. The Maple Leafs won three straight titles from 1962-64 before Armstrong clinched the Stanley Cup in 1967 with an empty-net goal in Game 6 against the Montreal Canadiens.

“George is part of the very fabric of the Toronto Maple Leaf organization and will be deeply missed,” Maple Leafs president Brendan Shanahan said. “A proud yet humble man, he loved being a Maple Leaf but never sought the spotlight even though no player played more games for Toronto or captained the team longer. Always one to celebrate his teammates rather than himself, George couldn’t even bring himself to deliver his speech the day he was immortalized on Legends Row.”

The final paragraph from his unread speech is as follows:

“Hockey is a great game and I love it. I am part of a fading generation that you will never have again. Every one of us is one of a kind, that will never be repeated. To all of my friends and acquaintances, thank you for your advice and direction, that helped make me who I am today … a very, very happy person.”