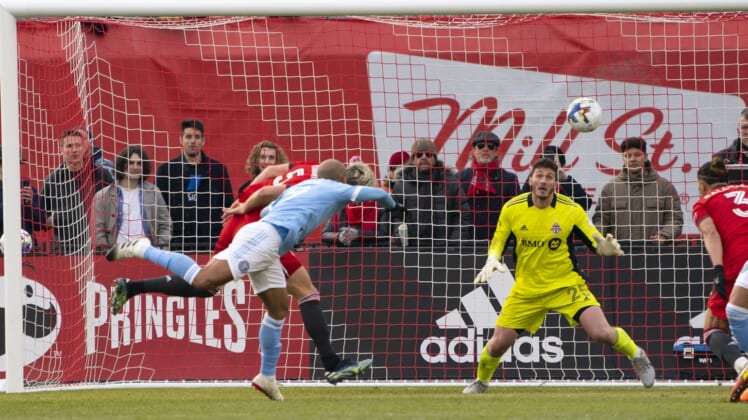 Alex Bono made seven saves and Jesus Jimenez scored in the first half as Toronto FC recorded a 2-1 victory over visiting New York City Football Club on Saturday afternoon.

Bono helped Toronto (2-2-1, 7 points) win its second straight in a game when NYCFC held possession for 57.4 percent of the match and had 15 shots.

Bono protected a two-goal lead by making three diving saves on Keaton Parks in a span of nine minutes. He stopped Parks in the 58th minute, 61st minute and again in the 67th.

Bono also made a diving stop on Alfredo Morales in the 70th and nearly notched his 24th career clean sheet. He also denied Alexander Callens in the 90th minute before losing his shutout bid.

Jimenez scored his third MLS goal in the 31st minute and Toronto scored again late in the first half on a NYCFC own goal.

Heber scored on a header during second-half stoppage time as NYCFC (1-3-1, 4 points) scored its first road goal of the season and barely avoided getting blanked for the fourth time this season.

After his free kick sailed well over the crossbar in the seventh minute, Jimenez scored by teaming up with Jonathan Osorio.

Osario made a clean pass as Jimenez slipped past Parks and Callens. Jimenez then eluded Talles Magno and ripped a right-footed shot from the center of the box into the bottom right corner past a diving attempt by Johnson.

Toronto capitalized on an NYCFC miscue to open a 2-0 lead in the 43rd minute.

Alejandro Pozuelo made a long kick intended for Lukas MacNaughton but defender Thiago Martins saw the ball graze off his head and into the net.

Toronto nearly extended the lead in the 71st minute, but Luca Petrasso was stopped by Johnson. Toronto almost scored again 11 minutes later, but Johnson denied a chance by Michael Bradley