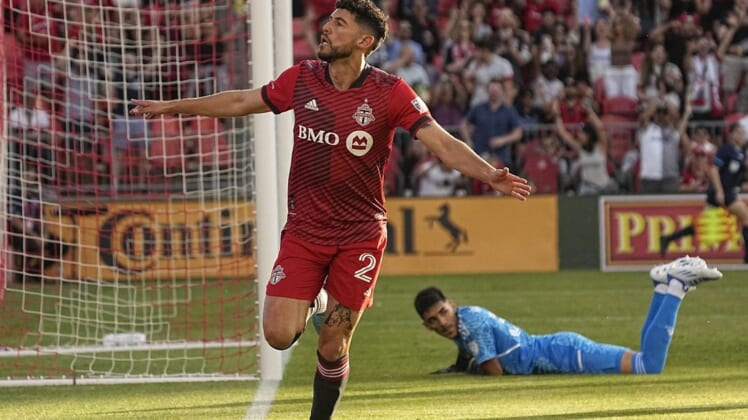 Toronto FC chase a second consecutive home victory when they play host to the Columbus Crew on Wednesday.

Jonathan Osorio scored the opening goal last Saturday in a 2-1 win against Atlanta United and Ralph Priso-Mbongue added the game-winner to start a four-game homestand.

After Wednesday’s game, Toronto FC (5-8-3, 18 points) play the Seattle Sounders on Saturday and Osorio, Canada’s national team midfielder, knows the club is facing an opportunity to turn around the season.

“It’s a good time to get going,” Osorio said. “We know how important the summer months are in this league, especially this stretch with the amount of home games that we have.”

Osorio returned from a lower-body injury to score his fourth goal in 12 games.

The Crew (4-5-6, 18 points) appear to be building confidence on the road after some recent misery.

Although they are just 1-2-5 in away matches, the Crew earned points in their last two road games, playing to a 0-0 tie at Real Salt Lake on Saturday and winning 2-1 at Atlanta United on May 28. They are now just 4-11-10 on the road over the past two seasons.

Despite not scoring a goal, it was an impressive outing for Columbus at Salt Lake, which is 6-0-2 at home. With the Crew facing a number of injuries, homegrown midfielder Sean Zawadzki started in his MLS debut and won praise from his coach.

“I thought he was extremely comfortable for his debut league game,” Caleb Porter said. “Really showed that he’s a young up-and-coming player that’s going to be the future.

“It’s not easy for a young player to step in. It’s his first professional game for the first team, other than (U.S.) Open Cup,” Porter said. “It’s not easy to have a mentality and to have confidence and to be, as comfortable in possession and defensively as he was. It gives us really good confidence in him moving forward.”