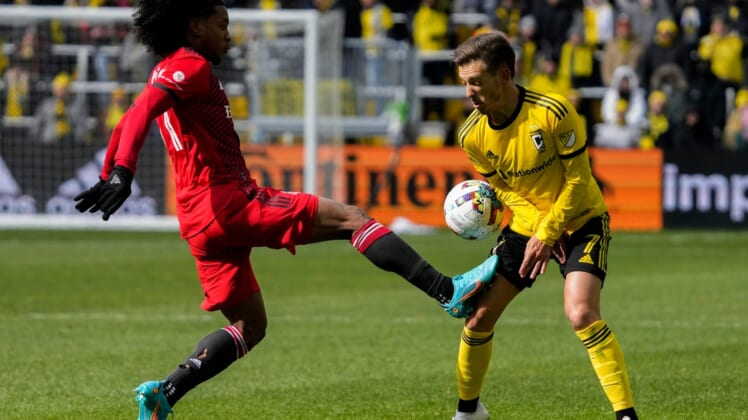 Toronto FC eyes their first win of the season when they host D.C. United on Saturday.

After opening the 2022 campaign with a draw against Dallas, Toronto (0-2-1, 1 point) has dropped its last two games, outscored 6-2 in those outings.

“Obviously the results haven’t gone our way,” midfielder Jonathan Osorio said. “Most of that has been mistakes that are inflicted by ourselves, so we’re just trying to improve every day.”

Osorio is responsible for one of the three goals the Reds have tallied thus far, with striker Jesus Jimenez delivering the other two.

“It’s early in the season, this is a very new team, and there’s a lot of new things going on, so we can’t just expect to be an amazing team right away,” Osorio said. “There’s a process to that and so we’re just taking it day-by-day and trying to improve.”

Toronto is winless (0-5-4) in its past nine MLS matches, dating back to last season. It’s the longest such stretch for the club since going 11 games without a win from March-June 2013.

After suffering its first loss of the season last week, 2-0 to the Chicago Fire, D.C. (2-1-0, 6 points) will look to past success against Toronto to get back on track. United is unbeaten in their past nine matches against the Reds, their last loss against them coming back on June 17, 2017.

“There were many key moments or turning points during the game (against Chicago) that could have ended in a good result for us,” coach Hernan Losada said. “Opportunities we missed, and we didn’t take it, and at the end, you lose the game. We move forward, we go to the next one knowing that we have three more points than last season — six out of nine.

“It’s still a great start to the season, knowing that a few pieces still have to arrive, and the team needs to get stronger.”

Ola Kamara has scored in each of his past three games against Toronto and has six total for his career against the club, tied for his highest total against any opponent.