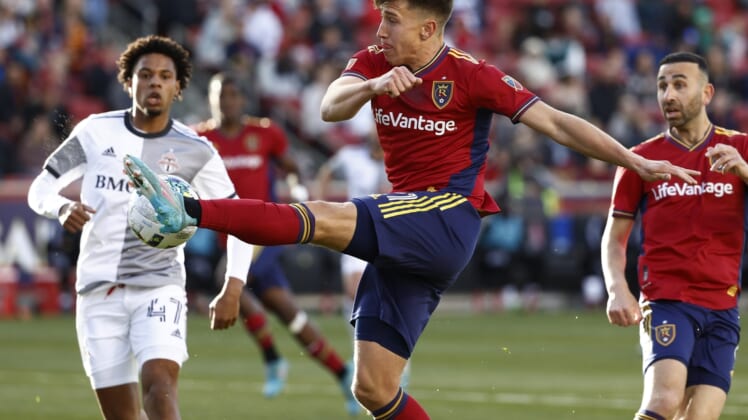 Salt Lake (3-1-3, 12 points) was denied its third consecutive home victory to start the MLS season and surrendered points at home against Toronto for the first time since 2017. Overall, RSL has earned back-to-back draws.

Toronto (2-2-2, 8 points) also got a first-half goal from Kosi Thompson but never led during the match. The Reds are winless in Utah going back to 2007 and have one win and two draws in 12 road matches versus RSL.

Toronto and Salt Lake opened the match with a bang, trading goals in the first 10 minutes.

RSL got on the board first when Justin Meram struck in the seventh minute. Off a cross from Sergio Cordova, Meram cut inside against Michael Bradley and blasted a right-footer from outside the 18-yard box, threading the ball into the top left corner.

The Reds answered with an equalizer from Thompson in the ninth minute. Thompson volleyed a cross from Jacob Shaffelburg near the back post and cut the ball inside the right post for the score.

Salt Lake regained the lead in the 43rd minute thanks to Damir Kreilach’s first goal of the season. An unmarked Kreilach snagged a long cross from Maikel Chang, brought down the ball and tapped it in as he entered the 6-yard box.

The Utah club had a 9-2 advantage in total shots before halftime, putting three balls on frame.

Toronto finally came up with a second equalizer in the 79th minute. Nelson took the ball away from Kreilach and blasted home a right-footer from long distance, taking advantage of an empty net after goalkeeper Zac MacMath came off his line and out of the goalmouth.

The Reds were a man down starting in the 86th minute. Carlos Salcedo was sent off with a red card after kicking Cordova in the face while challenging for the ball, but Salt Lake could not capitalize on having the man advantage.