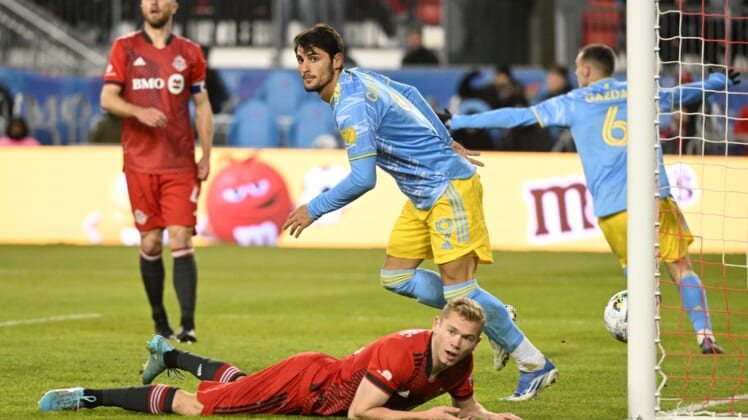 With the score tied in the 51st minute, Pozuelo used some spectacular footwork to create the game-winning goal. Surrounded by defenders in Philadelphia’s box, Pozuelo created enough room for himself to fire a quick left-footed shot past goalkeeper Andre Blake.

It was a comeback win for Toronto (3-2-2, 11 points), who trailed after Julian Carranza’s goal put Philadelphia ahead in the 34th minute. However, it took just five minutes for Toronto FC to equalize on Jose Jimenez’s fourth goal of the season.

The Union (5-1-1, 16 points) had been the only MLS team without a loss entering Saturday’s play, and their five-game winning streak was a franchise record.

Jimenez’s tally ended Philadelphia’s streak of 456 minutes without a concession. Toronto’s two goals matched the number of goals allowed by the Union in their first six games.

After going 0-2-1 in their first three games, Toronto FC is on an unbeaten run of their own over their last four outings (3-0-1).

The Union poured on the pressure after Pozuelo’s goal, but Toronto FC’s defense held tight. Toronto was missing a key figure on the back line, as designated player Carlos Salcedo was serving a one-game red card suspension.

Jonathan Osorio left the game in the 56th minute with an apparent leg issue. The Toronto midfielder was able to walk off the field under his own power after the non-contact injury.

Carranza’s goal was his second of the season. Mikael Uhre’s chip pass found Carranza in front for a close-range header.

In the 39th minutes, Osorio found a bit of space in the box and passed to an open Jimenez, and the forward then curled a perfectly-placed shot inside the far post.

Jimenez has started his MLS career with a flourish, scoring four goals in seven games since signing with Toronto FC in February.