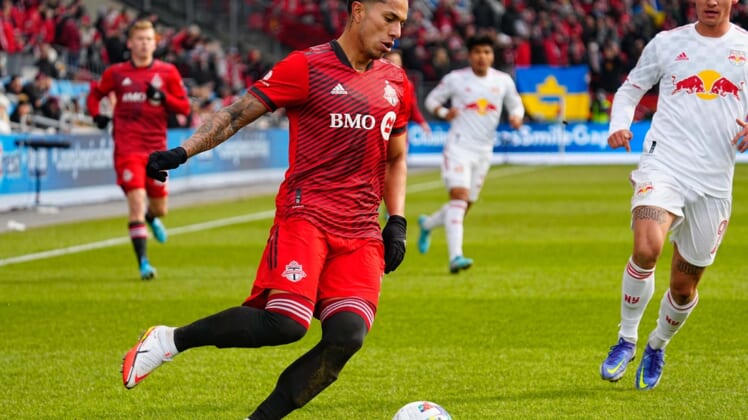 The Columbus Crew host Toronto FC on Saturday afternoon in a matchup of teams looking for redemption.

Toronto FC (0-1-1, 1 point) were routed 4-1 by the New York Red Bulls in their home opener last Saturday, allowing four goals in the first half for the first time in the club’s history.

“I have confidence that we’re going to become a really good team,” Toronto first-year coach Bob Bradley said. “But a good team, still on certain days where maybe something goes against you, your response is important.”

While the Crew (1-0-1, 4 points) have yet to taste defeat, the 3-3 draw at San Jose last Saturday certainly felt like a loss. The 10-man Earthquakes rallied with set-piece goals by Francisco Calvo in the 84th and 96th minutes.

“Sometimes a lesson like that early in the year helps you,” Crew coach Caleb Porter said. “I think it will help this group manage games better.

“There are going to be mistakes throughout the year, and it’s about how they respond from them and learn from them. We’re very reflective.”

Toronto FC will be without Carlos Salcedo after the Mexican national team defender was suspended one match for his lunging tackle of Red Bulls forward Patryk Klimala.

Salcedo was given a yellow card at the time but the MLS Disciplinary Committee reviewed the play this week and deemed it a “serious foul play” in issuing the suspension.

Bradley thought the punishment was harsh.

“I don’t even think the AR (assistant referee) called the foul,” Bradley said. “It’s early in the year (and) there’s a tendency sometimes early in the year to be on top of these things more. If that’s the way it’s going to be done, then I hope there’s consistency throughout the year.”

The Crew will try to take advantage of Salcedo’s absence, particularly Lucas Zelarayan, who will try to extend his goal streak to six matches dating back to last season. He scored twice against San Jose.